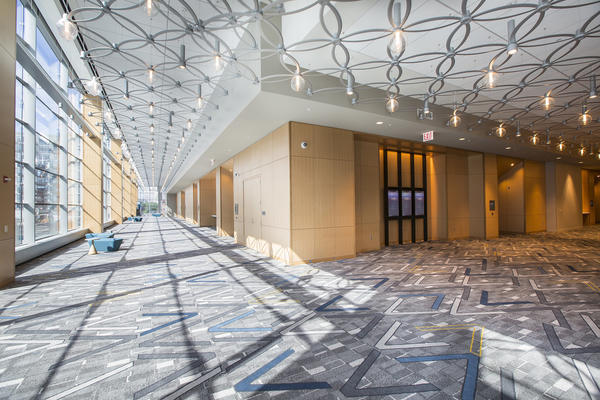 Marriott Marquis Chicago announced that it is officially open to the public. The largest hotel to open this year in Chicago, and the largest Marriott to open in North America in 2017, the property brings 1,205 guest rooms, including 44 suites, to the burgeoning entertainment and convention district of McCormick Square. Marriott Marquis Chicago is directly connected to the country’s largest convention center, McCormick Place, and is adjacent to the new 10,000-seat Wintrust Arena. Beyond its immense 40-story presence, the arrival of the hotel revolutionizes meeting and business accommodation standards in Chicago.

Meeting Spaces
The property boasts 93,000-square-feet of high-tech meeting and event space, including two 25,000-square-foot ballrooms and 43,000-square-feet of breakout meeting rooms. The Junior and Grand ballrooms, meant for corporate and social functions, are amongst the largest in the city and the only ones to feature dramatic views of the city skyline. Each ballroom has a floating ceiling plane comprised of repetitive angles that add creative depth and dimension to the 30-foot ceilings. The American Book Company building boasts 29 meeting rooms varying in size, along with centralized lounges with soft seating and charging areas on each floor. Custom carpet designs are prominent throughout the space to pay homage to the neighborhood, including a V-shaped design meant to evoke tread marks as a subtle nod to nearby Motor Row. A 4,000-square-foot event space on the 33rd floor will open later this year and ensure a stunning atmosphere, with floor-to-ceiling windows offering unobstructed 180-degree views of Chicago and Lake Michigan.

Designed by Chicago-based Anderson/Miller Ltd., in collaboration with design architect Gensler, the interior of the property embodies the philosophy that everything matters. The hotel is rooted in the ethos of Chicago, with a strong, unpretentious and clean contemporary design. The new modern glass hotel connects to the historic American Book Company building, originally built in 1912, creating a unique architectural juxtaposition of old meets new. Beautiful and practical overall, the property is ideal for the sophisticated business traveler.

Upon entering the lobby, guests are welcomed into a natural and calming environment, with rich white oak millwork, supple leathers, and modern seating keeping the space elevated yet inviting. Angular motifs carry throughout the tower, taking cues from Chicago’s many bridges, as well as the building’s exterior structure itself.

Furnishings are fresh and contemporary throughout. The guest rooms embody a high level of comfort with minimal and thoughtful design touches in cool shades of grey and white to complement the incredible exterior view of the city. To further invite the city in, each room features unique lightbox artwork – the first of its kind within a hotel room – depicting various Chicago bridges and locations. Of the 1,161 regular guest rooms, there are 26 club kings, 461 kings, and 674 doubles.