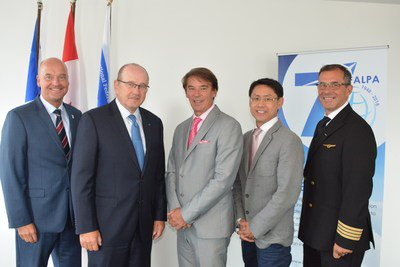 Montreal to host 3 IFALPA conferences over the next 15 years

The International Federation of Air Line Pilots Association (IFALPA) has set a milestone in its engagement with the civil aviation community of Greater Montreal.

IFALPA has signed a strategic partnership with Tourisme Montreal, confirming that it will host three IFALPA Conferences in the city in 2023, 2028 and 2033. More than 1,500 representatives will converge upon Montreal over the next 15 years, which is excellent news for the leading city for international events in North America.

“We are very proud to have the privilege of hosting this prestigious event on three occasions. We look forward to forging ties with the IFALPA and to offering their attendees unforgettable experiences in our city.” says Yves Lalumière, President and CEO of Tourisme Montreal.

IFALPA moved its headquarters from the UK to Montreal about 6 years ago, to be closer to the International Civil Aviation Organization (ICAO) and many other key aviation stakeholders. It is in its 70th year of operation and represents approximately 100,000 pilots worldwide.

“While many international organizations think about what legacy to leave with their major events rotating annually around the globe, this agreement allows us to establish a permanent footprint in the city known as the world capital of civil aviation,” states IFALPA President Captain Ron Abel.

A highly successful conference hosted in the Federation’s hometown in 2017 became the starting point for reflections on how to make the organization of these 5-day events more efficient. Instead of reinventing the wheel every year by exploring new venues, accommodations, suppliers and sponsors, returning quinquennially to Montreal makes it possible to cultivate partnerships. “This is a win-win for everybody,” summarizes Christoph Schewe, IFALPA’s Managing Director, “We know the location, we save on travel expenses for staff and we can build on established partnerships, which frees up resources. We greatly appreciate the trust that Tourisme Montreal places in the Federation and the fundamental support they offer to us for the road ahead.”