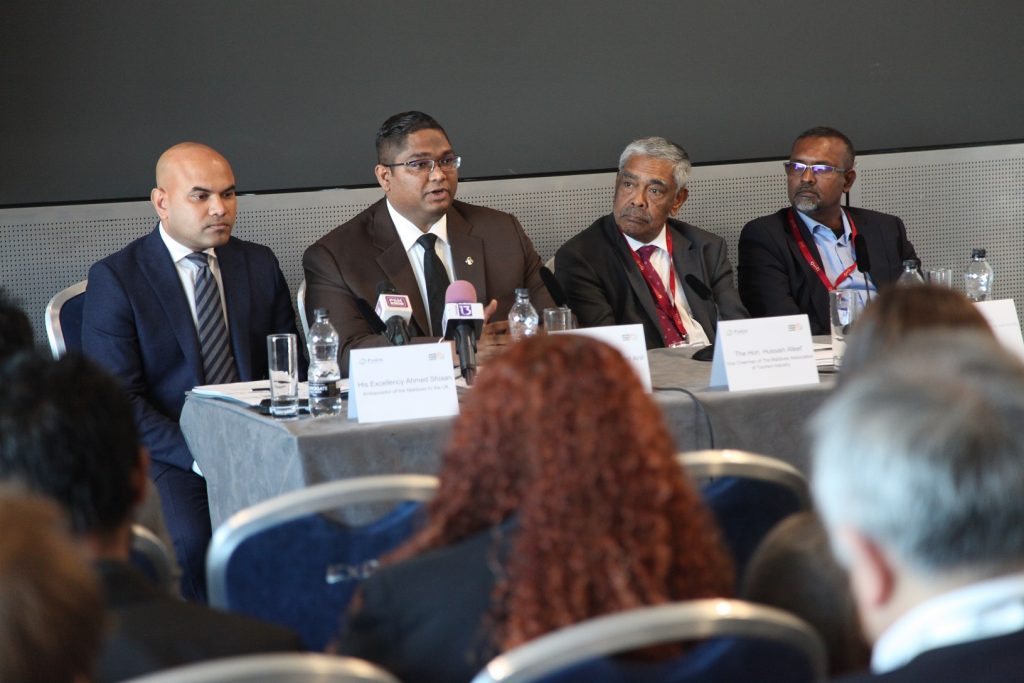 His Excellency Mohamed Anil, Attorney General, has today announced several new tourism developments taking place in the Maldives for 2018 during a press briefing at World Travel Market in London.

The announced plans include expansion of the recently rebranded Velana International Airport and the opening of the China-Maldives Friendship Bridge in July 2018 as well as development plans of the health services in the Maldives, providing world-class medical care to both the community and the tourism industry for 2018. Furthermore, the Maldives Government is also looking to build a Youth City on Hulhumalé, an island adjacent to the capital city, with the aim of providing accommodation and employment for future generations.

The new developments in the Maldives will support the increasing demand for tourism to the island nation, with the UK continuing to be an important inbound market with 68,007 UK tourists visiting the country from January – August 2017. This figure accounts for 7.6% of all tourists visiting and is the second highest share across all inbound markets for this period.

The China-Maldives Friendship Bridge, set to be completed and inaugurated in July 2018, will be a welcomed addition to the Maldives’ infrastructure. The 1.39-kilometre-long and 20.3-metre-wide bridge will span from Malé’s eastern edge to the western corner of the island of Hulhulé, where Velana International Airport is located. The bridge project, which was launched in 2015 and is the first project of its kind in the Maldives, will provide two lanes for four-wheeled vehicles as well as separate lanes for bicycles, motorcycles, and pedestrians. Construction of the China-Maldives Friendship Bridge began in 2016 and following its completion in mid-2018, the bridge will help to improve inter-island transport and economic development in the region by providing a reliable land connection for locals and holidaymakers between the capital Malé, the airport and the new youth city Hulhumalé.

Following its rebranding in January 2017, and to help handle an increasing number of visitors to the Maldives, Velana International Airport is currently embarking on an impressive infrastructure development, including a new passenger terminal, expected to be completed in 2019-20. In mid-2018, the airport will also open a new 3,400-metre-long, 60-metre-wide Code-F runway that will allow the airport to accommodate the world’s largest passenger airliner, the Airbus A380, with the aim to cater for seven million passengers per year. Once completed, the existing runway will be used as a taxiway, reducing the turnaround time of aircrafts at the airport. Formerly known as Ibrahim Nasir International, the main international airport in the Maldives was rebranded as Velana International Airport on 1 January 2017 to pay homage to the family name of Ibrahim Nasir, the former President of the Republic of Maldives who brought independence to the nation and opened the first Maldivian Airport at Hulhulé island in April 1966. The developments at Velana International Airport will help to increase the number of tourists arriving in Maldives along with improving the standard and quality of services provided to its customers.

The expansion of health services at the main government hospital, Indira Gandhi Memorial Hospital (IGMH), will include a new 25-storey building, which is expected to open in 2018. Furthermore, a brand new tertiary hospital named TreeTop Hospital is to be opened later this year in Hulhumalé. Along with transforming the healthcare landscape of the Maldives and creating several employment opportunities, the expansion plans will provide tourists and the local community with world-class medical services and health facilities.

Hulhumalé is a fully-reclaimed and pre-planned city located just eight kilometres from Malé and connected to the International Airport by a causeway. The artificial island has been designed as a modern city to accommodate the growing population of the Maldives and provide green initiatives including environmentally-viable transport options and architecture. Alongside youth-focused residential accommodation and an international cruise terminal, Hulhumalé will also offer recreational areas such as a yacht marina, Olympic-sized swimming pool, water theme park, sports arena, football and cricket stadium as well as a music and arts institute. After completion of these projects, the aim is to provide housing for more than one-third of the total population of the Maldives.

His Excellency Mohamed Anil, Attorney General, said, “This is a very exciting time for the Maldives with a number of key infrastructure developments taking place during 2018 and beyond, which will benefit both tourists and the local community. Our tourism industry is continuing to expand and with 10 new hotel resorts opening during the next few years, we look forward to being able to accommodate even more visitors from overseas.”