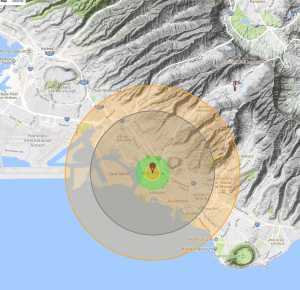 How to survive a ballistic missile attack on Hawaii?

If the emergency message by the Hawaii Emergency Management Service yesterday of an imminent ballistic attack would have been real, what could have been expected to happen to visitors and residents in the Aloha State?

eTN talked to Richard Rapoza, Public Information officer of the Emergency Management Services and with an information officer of the U.S. Pacific Command. Yesterdays eTN Article “Escaping death beyond horror in Hawaii: People running for shelter refused at Walmart, but welcomed at Home Depot”  had assumed a devastating scenario that may not all be the case in a real attack.

If going with the highly hypothetical version of a true missile attack the realities could have been devastating for many, but not for all residents and visitors in the US State of Hawaii. It’s not all over when you get the message on your phone, hear the sirens or watch the US Command message on TV. It takes common sense, knowing what to do, and a little luck to get out of this alive.

Where could the threat be from?
The following countries have  Intercontinental Ballistic Missiles and could theoretically attack the United States.

An intercontinental ballistic missile (ICBM) is a guided ballistic missile with a minimum range of 5,500 kilometers (3,400 mi) primarily designed for nuclear weapons delivery (delivering one or more thermonuclear warheads).

Judging from the current political landscape the only possible scenario would be a threat from North Korea.

According to US Intelligence Data Pyongyang’s atomic bomb has a power of 150kT what remains relatively weak compared to the power the rest of the countries with Intercontinental Ballistic missiles have in their stockpiles.

The Peak speed for an ICBM is in the ballpark of 6-7km/s (any faster and the payload would go orbital), and it takes about 10 minutes to accelerate to that speed. North Korea to Hawaii 4,661 miles or is 7500km, at 6.5km/s is ~20 minutes. Add in the acceleration time and you’re looking at about 30 minutes total.

Estimates of the country’s nuclear stockpile vary: Some experts believe Pyongyang has between fifteen and twenty nuclear weapons, while U.S. intelligence believes the number to be between thirty and sixty bombs. The regime successfully tested intercontinental ballistic missiles (ICBM), each capable of carrying a large nuclear warhead, in July and November 2017.  Pyongyang said that in its November testing of the new Hwasong-15 ICBM, the missile hit an altitude of 4,475 kilometers (2,780 miles), far above the International Space Station, and flew about 1,000 kilometers (590 miles) before landing in the sea off Japan’s coast. Analysts estimate the Hwasong-15 has a potential range of 13,000 kilometers (8,100 miles) and, if fired on a flatter trajectory, could reach anywhere on the U.S. mainland.

Time needed the US would be aware of an attack?

The likelihood the United States would know about the launch of a ballistic missile is almost 100%. Within seconds a Ground-based interceptor would be put in motion.

The Ground-Based Interceptor is the anti-ballistic missile component of the United States’ Ground-Based Midcourse Defense (GMD) system. This interceptor is made up of a boost vehicle, constructed by Orbital Sciences Corporation, and an Exoatmospheric Kill Vehicle, built by Raytheon. Integration of these is performed by Boeing Defense, Space & Security.

What is the likelihood for the U.S. to intercept and destroy a missile attack before the bomb strikes?

The United States tested the system 18 times since 1999 and now stands at nine successful tests out of 18 since 1999, exactly 50 percent. Considering the system is getting better with time it could be speculated the success rate could be larger than 50%

What if the U.S. cannot shoot down the missile?

The likelihood North Korean technology will miss its target is high.

What if the bomb is hitting its target, and the densest and most populated area in Hawaii, the city of Honolulu on Oahu?

The answer is shocking, but also has a more than an 80% component of hope and survival. 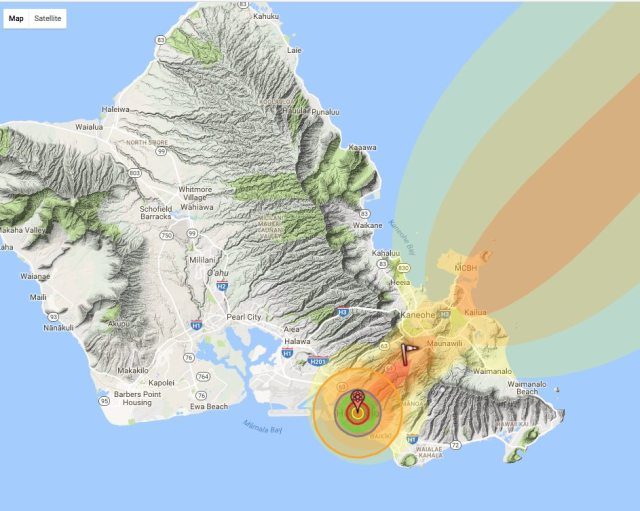 According to Nukemap, a ballistic missile hitting downtown Honolulu would destroy most of Honolulu and a large part of Waikiki. In any given 24-hour period, there are approximately 362,523 people in the 1 psi range of the most recent detonation.

The estimated total-close fallout contours for a 150 kiloton surface burst (50% fission) with a 15mph wind:

Fallout contour for 1 rads per hour:

Fallout contour for 10 rads per hour:

Fallout contour for 100 rads per hour:

Fallout contour for 1,000 rads per hour:

Shelter:
A shelter may become essential to survive if you are on the edge of the fallout or beyond.
The emergency warning system is therefore justified. A wooden house structure with windows closed may only protect when you are clear out of the most dangerous zones.
Concrete buildings like Walmart, Target or Home Depot, Costco, Hotels, Schools, University, Concrete Apartment buildings and homes, shops could be the difference between life and death.

Much of the destruction caused by a nuclear explosion is due to the blast effects. Most buildings, except reinforced or blast-resistant structures, will suffer moderate damage when subjected to overpressures of only 35.5 kilopascals (kPa) (5.15 pounds-force per square inch or 0.35 atm). Data obtained from the Japanese surveys found that 8 psi (55 kPa) was sufficient to destroy all wooden and brick residential structures. This can reasonably be defined as the pressure capable of producing severe damage.

For Walmart, Target, 24-hour Fitness closing their stores to those seeking shelter was irresponsible and it can only be hoped everyone in Hawaii is learning, changing policies, changing laws. Perhaps the Aloha spirit may be the best assurance to survive.

North Korea’s guiding philosophical principles have been juche (self-reliance) and songun (military-first politics). The military plays a central role in political affairs and its position has been steadily elevated through the Kim dynasty. North Korean leadership believes that hostile external forces could mount an attack, including its democratic neighbor to the south and the United States. As a result, in Pyongyang’s eyes, the only way to guarantee its national survival is to develop asymmetric military capabilities to thwart its perceived threat.

Estimates of the country’s nuclear stockpile vary: some experts believe Pyongyang has between fifteen and twenty nuclear weapons, while U.S. intelligence believes the number to be between thirty and sixty bombs. The regime successfully tested intercontinental ballistic missiles (ICBM), each capable of carrying a large nuclear warhead, in July and November 2017.  Pyongyang said that in its November testing of the new Hwasong-15 ICBM, the missile hit an altitude of 4,475 kilometers (2,780 miles), far above the International Space Station, and flew about 1,000 kilometers (590 miles) before landing in the sea off Japan’s coast. Analysts estimate the Hwasong-15 has a potential range of 13,000 kilometers (8,100 miles) and, if fired on a flatter trajectory, could reach anywhere on the U.S. mainland.

What is next?
This was a wake – up -call. Hawaii’s relaxed response to danger, security has to change. Legislation mandating companies with a brick building to take in those seeking shelters in an imminent emergency should be on the books ASAP. Giving the large percentage of homeless people a safe place to go is becoming even more essential.
Training, a chain of command needs to be followed in an emergency.

Hawaii is perceived as one of the safest travel and tourism destination. Travel and tourism is the livelihood of the Aloha State. The main players in the industry are not Hawaii based and need to put their own fair share to reach out to the community not only with paying minimum taxes, paying low wages in a state with record costs. They should not think giving to the community is a charity, they must show real responsibilities. After all, it’s in their own interest after all – tourism is big money for the corporate HQ and shareholders.