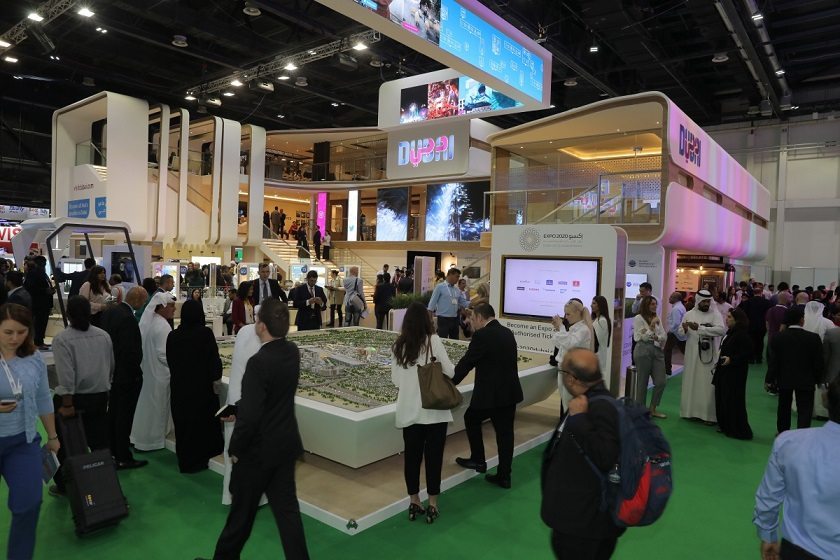 Recognized for creating a busy B2B atmosphere, Dubai Tourism boasted a well-planned and easily navigable layout with a good presentation of their stand and its services.

The hotly anticipated winners of this year’s awards were announced at a photo-call on the show floor on Tuesday 24th April.

Launched in 2015, the Best Stand Awards were created to recognise the design creativity and business-friendly appeal of exhibiting companies’ physical presence at ATM.

Commenting on Dubai Tourism’s winning stand, Matt Gibson, said: “It was an exceptionally good business stand with an effective and efficient set-up. One of the few stands to boast a triple-decker layout, Dubai Tourism attracted huge numbers of visitors throughout the event. Everyone working on the stand was incredibly welcoming and hospitable and the whole approach and attitude really captured the ideas of Dubai and what it has to offer as an emirate.”

The judging criteria for the Best Stand Design award focused on identifying an eye-catching stand with a creative design that made the best use of available space and attracted a high level of visitor traffic.

And Lebanon’s stand ticked all the boxes. Pippa Jacks, said: “I was very impressed, the stand really stood out and presented a welcoming and homely feature. The stand featured a huge front door, with staircase which led to a well-laid out meeting space. It was a subtle, yet intelligent, way to showcase the country.”

The Czech Republic was recognized as Highly Commended in the Best Stand Design category.

Jacks, said: The stand boasted a large triangle in the middle of the stand with an interactive LED screen on one corner and creative posters of the country on the others. Both the stand and staff created a very welcoming experience, with lots of open meeting space.”

The award for Best Stand Personnel is an especially important accolade considering hospitality is a people business.
“The staff for SAUDIA were excellent,” said Leo Fewtrell. “From the executive team and welcome hosts to pilots and airline staff, they were all a great representation of the brand and although the stand was very busy, they were welcoming, highly professional and very keen to demonstrate all amenities from first class through to economy.”

The Best Stand Feature accolade was awarded to the stand that created the biggest impact and most creative ways of drawing in visitors, and they didn’t come more eye-catching than Turkey.

Jacks said: “Not only did the Turkey stand have a great atmosphere surrounding it but it also featured lots of little interesting elements from urban marbling and a huge trojan statue to an ice cream stall and to round it off a group of traditional musicians, singers and dancers.”

The Best Stand within the Travel Tech Show at ATM specifically highlights the importance of technology to the industry.

Nicholas Hall said: “Travelport have done a great job with their stand and what I really liked was the creative way they used their space. The best feature for me was the five different colored printers on the wall which automatically printed out photos tweeted by visitors to the stand. As well as meeting and workshop space, the stand also featured various charging stations.”

Babylon was recognised as Best Tech Highly Commended. Commenting on the stand, Hall said: “Judging on all factors, you see many types of stands at ATM, but to create something so minimal yet engaging and thought-provoking, while perfectly capturing what they do, is a huge achievement.”

The winners will be put to the public vote on the ATM Facebook account, for the chance of walking away with the People’s Choice Award.

The winners of the Best Stand Awards are as follows: