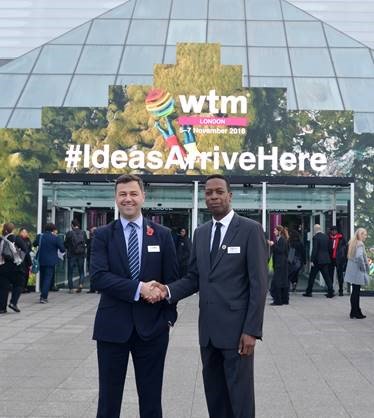 WTM London 2018, the event where ideas arrive, and its co-located sister event Travel Forward experienced this massive 6% increase in visitors fueled by an increase in senior travel and tourism industry professionals attending the event, according to unaudited figures.

Furthermore, members of the international media increased by 1% to 2,700. Overall participant numbers increased to 51,409 – making it one of the highest attended of the 39 WTM London’s that have taken place since it launched in 1980.

The record number of visitors to WTM London – surpassing 2014’s figure of 32,462 – was fuelled by a massive 39% increase in the key benchmark of exhibitor invitee visitors. Exhibitor invitees are among the most important and senior professionals in the travel and tourism industry, invited by exhibitors on the invite-only first day of the event to conduct high-level meetings and conclude business deals. A total of 17,567 exhibitor invitees attended WTM London across the three days of the event (Monday, November 5 – Wednesday, November 7), compared to 12,662 at the 2017 edition.

The event was also visited by 9,325 member of the prestigious WTM Buyers’ Club alongside the exhibitor invitees these visitors will sign deals with exhibitors worth more than £3 billion.

WTM London 2018 was given a greater regional focus with the introduction of five regional Inspiration Zones – UK&I and International Hub, Europe, Asia, Americas and Middle East and Africa. These Inspiration Zones led to an increase in content, ideas and inspiration for participants to take back to their business and implement to help fuel the growth of the travel and tourism industry.

Furthermore, the introduction of Travel Forward – the event to inspire the travel and hospitality industry with the next generation of technology – was a great success with more exhibitors than its predecessor The Travel Tech Show at WTM.

WTM London, Senior Director, Simon Press, said: “WTM London 2018 was a fantastic event and the most successful ever. WTM London is the event where ideas arrive and this was proved with a record number of exhibitor invitees in attendance making it among the highest attended events.

“WTM London 2018 was overhauled to have a greater regional focus with the introduction of regional Inspiration Zones. The increase in participants shows this strategy was a great success with the increase in content available at the event, further improving ideas creation at the event and around the travel and tourism industry.”

Audited figures from WTM London 2018 will be available in the New Year.