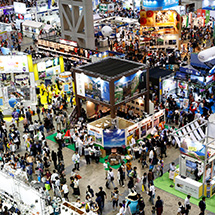 Opened in April 1996, “Tokyo Big Sight” – an understatement, by the way – is located in the Ariake Minami district of Tokyo Waterfront City Rinkai fukutoshin on the waterfront of Tokyo Bay. Its most iconic feature is the visually-distinctive Conference Tower. The name “Tokyo Big Sight” in Japanese eventually became the official name of the venue, and it also has become the name of the operator since April 2003.

“Tokyo Big Sight” was a planned venue for the 2020 Summer Olympics, which will host wrestling, fencing, and taekwondo events. However, due to the cutting of public funds, the organization committee was forced to choose an alternative addition to serve as the main broadcasting center and press center for the Games.

Public transportation in this giant city is excellent. Located at Tokyo Bay, “Big Sight” is about 30 minutes by rail from the busiest train hub in the country – Tokyo Station. Its most distinctive feature is the unique architecture of its 58 meter-high, 8-story Conference Tower. The site utilizes a steel frame with reinforced concrete construction, boasting a total floor area of 230,873 m² which outsizes Makuhari Messe’s floor space by half, and of which 35% is indoors. The convention center is divided into 3 main areas, each with its own restaurants and other supporting facilities: The East Exhibition Hall, the West Exhibition Hall, and the Conference Tower.

The architectural element most associated with the “Tokyo Big Sight” name is the glass and titanium-paneled Conference Tower that appears as a set of 4 inverted pyramids mounted upon large supports. The first floor is comprised of an 1100-seat reception hall and 4 conference rooms of varying sizes. The second floor is made up of the Entrance Plaza which includes the main access area, the glass-roofed Event Plaza, the Entrance Hall that leads to the exhibition halls proper, and the Exhibition Plaza. Here, there are no floors 3 through 5 due to the structure’s above-ground stature.

Floors 6 and 7 can be directly accessed via escalator from the second-floor Entrance Hall, and is comprised of the main convention facilities of the Tower. The sixth floor houses 10 conference rooms of small to medium size, some of which can be merged into larger spaces by removing intervening partitions. Floor 7 houses the 1000-seat International Conference Room as well as 3 conference rooms of much smaller size. Floor 8 houses 5 conference rooms.

Scattered around the Tower’s vicinity are public art pieces, most of which are works by international artists such as Claes Oldenburg and his wife Coosje Van Bruggen, Michael Craig-Martin and Lee U-Fan. These include a giant sculpture of a saw, a large stylized pond, and 3 marble beds.

The East Exhibition Hall’s main layout consists of a central 600-meter-long, 2-tiered galleria, flanked on both sides by 3 mostly identical exhibition halls, and has underground parking available. The overall height of the structure is 3 stories, with the galleria reaching 2 stories. The glass-roofed galleria is equipped with moving walkways for easier movement, food outlets, escalators, electronic signboards, and a host of other relevant facilities.

Each hall has a mobile roof that enables exhibitors to control the amount of sunlight coming through, recessed electronic and control service pits at regular intervals (6 meters), a show office, 4 meeting rooms, and a dressing room. It is possible to merge a hall with adjacent halls on the same side, allowing for a maximum continuous floor space 3 times the capacity of a single hall, or a grand total of 26,010 m². Unlike its West counterpart, the East Exhibition Hall is not located next to the main Conference Tower area.

The West Exhibition Hall’s layout consists of 4 internal halls surrounding a central 2-tiered Atrium. Halls one and 2 occupy the first floor, and are each equipped with a single meeting room, 2 show offices, and 7 meeting rooms. If necessary, they can be merged with the glass-roofed atrium area to maximize all available exhibition space. Halls 3 and 4 are individually smaller than the first-floor halls, as the rest of the space not taken up by the Atrium’s upper area is largely the rooftop exhibition area.

Adjacent to the West Exhibition Hall is an outdoor exhibition area, which like the rooftop area overlooks the waterfront. Like the other exhibition areas in the “Tokyo Big Sight,” it is possible to combine both upper halls and both spaces together to create a single continuous floor area. All in all, the West Exhibition Hall boasts in total 6 show offices, 23 meeting rooms, and 3 dressing rooms. The gross total floor area of the Hall stands at 46,280 m².