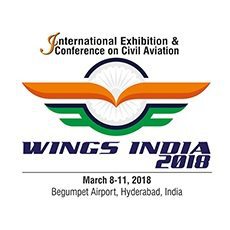 Wings India 2018 off to a flying start in Hyderabad

The Assam Government has offered to provide Rs. 100 crore per year for three years for expansion of air connectivity to ASEAN under the centrally-sponsored scheme UDAN. For UDAN – International, the government would facilitate the bidding process, but the final decision would rest with the state government, said the Civil Aviation Secretary Mr. R.N Choubey at a press briefing held at ‘WINGS INDIA 2018’, organized by FICCI jointly with the Ministry of Civil Aviation and Airport Authority of India.

Mr. Choubey said that creating airport infrastructure quickly and providing skilled manpower were the main takeaways from the CEOs Forum, which was held earlier in the day. He added that the aviation sector was doing exceedingly well, but the challenge was to provide infrastructure to match the sector’s growth.

Speaking about the requirement of skilled manpower in aviation, the Secretary said that in the next five to six years, 8,000 to 10,000 pilots would be needed. He added that the government does not want to step in areas where market forces can play a role. On the issue of MRO, he said that the government was providing a level playing field to the MROs within the country.

Mr. Choubey said that India’s domestic air passenger traffic has grown over 20% in the last three years. The growth this fiscal is expected to be around 17%. He added that the government was committed to expediting the process of Air India’s disinvestment and is likely to invite Expressions of Interest (EoIs) from interested parties in the next few weeks.

Addressing a query on airport development, the Secretary said both, brown and green field airports, were being developed. The capacity was being expanded of brown field airports. Besides, to manage the traffic at Delhi airports, for UDAN flights the Hindon airport base would be used and a new airport was coming up in Jewar.