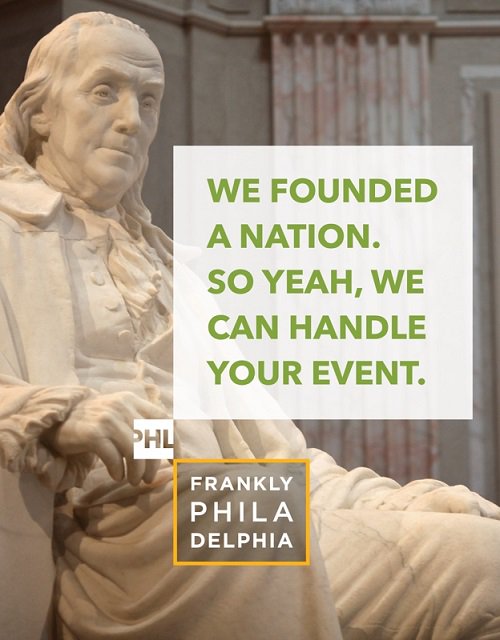 We founded a nation. So yeah, we can handle your event.

“A city that speaks for itself.” That’s the mantra of a new campaign to promote Philadelphia and all of the things that have made it a dynamic destination for meetings, conventions, events, and overseas visitors. Presented by the Philadelphia Convention and Visitors Bureau, Frankly Philadelphia is unabashed about the city’s current moment.

“Our core mission remains the same – the PHLCVB creates positive economic impact across the Philadelphia region, driving job growth, and celebrating the health and vitality of our hospitality industry,” said PHLCVB President and CEO Julie Coker Graham. “This new communications platform promotes Philadelphia as a global tourism destination and embodies the spirit, vibrancy, and relevance of our city and the PHLCVB brand. Frankly Philadelphia makes a connection across a wide range of targeted segments including meeting and event planners and overseas visitors traveling to the city.”

In recent years, Philadelphia has hosted the World Meeting of Families (2015), the Democratic National Convention (2016), and the NFL Draft (2017). This year, the Philadelphia Eagles won Super Bowl LII and brought about a million fans to the Benjamin Franklin Parkway for a one-of-a-kind celebration. The success of these major conventions and events have helped position the city as a high-caliber, ‘must see’ destination to the rest of the country and the world.

Frankly Philadelphia is a bold refresh with a story arc celebrating the city’s past, present, and future. Known for being the epicenter of the American Revolution, the city has inherited an outspoken rhetoric and confidence of generations’ past.

The process began in May 2017 when the PHLCVB contracted Philadelphia-based strategic communications firm Karma Agency, a registered women-owned business enterprise (WBE). Karma laid the groundwork by conducting dozens of internal and external interviews with PHLCVB staff, board members, local stakeholders and customers. During the following eight months, an ideology began to take shape.

Creative assets were rolled out in several stages, beginning in early 2018. A sales video was created to highlight the work of PHL Diversity, a business development division of the PHLCVB. Sales materials, print and digital ads were also developed to compel meeting planners to take action.

A global tourism brochure, translated into eight languages, was created as a key sales tool to reach the organization’s top international markets. In addition, the signature destination video was released in the summer of 2018, providing the basis for sales and marketing presentations in support of both our convention and overseas tourism sales efforts. It is also on display at Philadelphia International Airport, greeting visitors as they travel to and from the city, and will be prominently featured during an upcoming Philadelphia Eagles’ broadcast from Wembley Stadium in London, England.

“As a Philadelphia-based agency, we recognized the significance of this project immediately,” said Karma Agency President Caroline Kennedy. “We were feeling the tectonic shift, as the city passed major tests on the global stage. This campaign is about building toward the future, upon a modern spirit of Philadelphia’s centuries-old can-do attitude. Frankly Philadelphia puts the capabilities of the PHLCVB and the Pennsylvania Convention Center in context of the surprise and delight of Philadelphia’s greatest present-day appeal – culinary prowess, rich arts and culture, history, character and authentic personalities.”