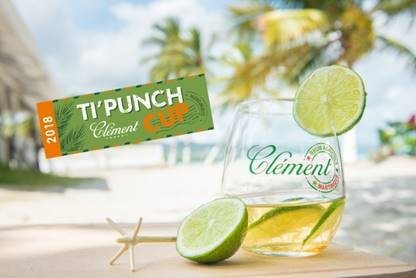 Ti’Punch Cup: Martinique celebrating the best rum in the world

Rhum Clément will receive the world’s best bartenders at Habitation Clément in Martinique for the Grand Finale of its global cocktail competition, the Ti’Punch Cup. For this second edition, the brand pushed across borders and will welcome participants from 14 countries as far as Spain, Germany and China. Rhum Clément has always been eager to promote the richness of Martinique discovered through rhum agricole. The goal of the Ti’Punch Cup is no exception, focusing this time on the classic cocktail of the island, the Ti’Punch.

The national finals held in 2017 in each participating country starting in New Orleans in July, and moving around the world concluding in Vietnam in December 2017, bartenders from all over the world have shown great creativity in bringing their personal “twist” to the traditional Ti’ Punch recipe. Inspired by the Martinican culture, bringing an artist’s look to an iconic classic and breaking the rules of recipes are some of the attributes that allowed 15 bartenders to win their tickets to the world finals.

“It has been simply amazing to see talented bartenders around the world be inspired by Rhum Clément for their cocktails and to watch them dance with our Martinican spirit and create their contemporary version of a Ti’ Punch cocktail” remarks Audrey Bruisson, marketing director for Rhum Clément. “Once you have advanced to the global final, all the bartenders are winners! We have a fun competition planned that will be challenging and entertaining for everyone there.”

The Clément Ti’ Punch Cup will kick off again in Martinique from March 12 to 16, 2018 for a journey to discover the universe of Rhum Clément in its native island, Martinique. The Grand Finale is scheduled for March 14 with three rounds of competitions to determine which of the world’s top bartenders will take home the 2018 Ti’ Punch Cup trophy.

The world finals will be held on March 14th, 2018 at Habitation Clément in front of an international jury from the world of fine spirits and cocktails. The candidates will be challenged on three successive rounds with two secretive elements to challenge the bartenders. They will be judged for their signature cocktail based around the Ti’ Punch, their knowledge of rhum agricole, and how well they have incorporated the wealth of Martinique and the world of Rhum Clément in their presentation.

The grand winner of the 2018 Ti’Punch Cup will become a new ambassador of the Ti’ Punch and will hold the Ti’ Punch Cup trophy in their bar, made by one of GAAM’s artists (Group of Artisans Martinique Art) following a local competition launched by the brand. Germany, England, Belgium, China, Denmark, United States, Spain, France, Greece, Italy, Martinique, Netherlands, Switzerland, Vietnam … who will win the second edition of the Clement Ti’Punch Cup? See you at Habitation Clément on March 14th!