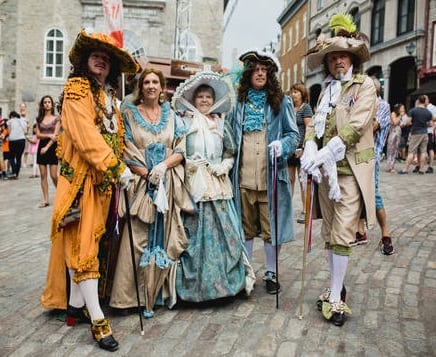 Tourism provides an excellent opportunity for economic diversification, both at the national and regional levels. In this regard, Government of Canada funding for projects involving the development and showcasing of recreational, cultural and tourist attractions helps boost the economic vitality and vibrancy of regions and communities.

Jean-Yves Duclos, Member of Parliament for Québec and Minister of Families, Children and Social Development, acting on behalf of the Honorable Navdeep Bains, Minister of Innovation, Science and Economic Development and Minister responsible for Canada Economic Development for Quebec Regions (CED) and Canadian Heritage, along with the Honorable Pablo Rodriguez, Minister of Canadian Heritage and Multiculturalism, announced that the Corporation des fêtes historiques de Québec had been awarded $308,600 in financial assistance for the 22nd edition of the New France Festival.

Every year, over 200,000 visitors immerse themselves in the fascinating historical universe of the New France Festival, an event that generates significant media and tourism spinoff for Quebec City and contributes to the city’s international visibility.

CED has provided $200,000 in financial assistance for the marketing of this historical showcase event. The funding is in the form of a non-repayable contribution under the Quebec Economic Development Program. CED’s assistance will serve to promote the Festival on the Canadian and U.S. markets, and enhance the tourism experience through new activities such as the Giants’ exhibition and the Jardins de la Maison Chevalier.

For its part, Canadian Heritage has granted funding of $108,600 to the 2018 New France Festival under the Local Festivals component of the Building Communities Through Arts and Heritage program. The money will allow the Festival to offer diversified programming—including shows, demonstrations and presentations about life during this era—to showcase our cultural and historical heritage.

“Every summer in August, Old Quebec City takes its many visitors on an extraordinary journey back in time. I am pleased with this support from the Government of Canada for the New France Festival, which brings to light Quebec City, the surrounding region and the entire province for the various Canadian, North American and foreign tourists. I wish you all a very enjoyable Festival!”

The Honourable Jean-Yves Duclos, MP for Québec and Minister of Families, Children and Social Development
“Tourism is one of the fastest growing sectors around the world. By supporting events such as the New France Festival, we are demonstrating our commitment to foster the growth of this industry, whose significant benefits contribute to Canada’s economic vitality.”

“The New France Festival gives visitors a very special opportunity to immerse themselves in our history in beautiful Quebec City. The Government of Canada is pleased to support such a unifying cultural event based on an unparalleled wealth of history.”

The Honorable Pablo Rodriguez, Minister of Canadian Heritage and Multiculturalism

• This year marks the 50th anniversary of federal regional economic development in Quebec: half a century of concrete action dedicated to the development of the regions and local businesses.

• The Local Festivals component of the Building Communities Through Arts and Heritage program provides funding for local groups for recurring festivals that present the work of local artists, artisans or heritage performers.

• This year’s edition of the New France Festival will run from August 1 to 5, 2018, under the theme “Be a Part of History.” Over the course of five days, 200 artists and as many volunteers will perform in Old Quebec City, including at the Fortifications of Québec National Historic Site, one of the locations that bears witness to Canada’s rich history.