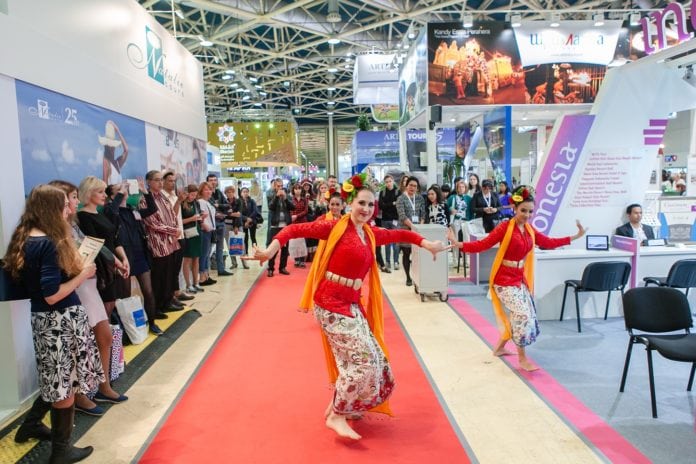 For 13 years, Indonesia has been exhibiting at OTDYKH Leisure; this edition will present a collective 80 sqm. stand with a comprehensive entertainment program, dancing, music, and their typical national dresses.

The Republic of Indonesia is the largest archipelago in the world comprising 13,466 large and small tropical islands fringed with white sandy beaches, many still uninhabited and some even still unnamed. It`s a huge nation, comprised of hundreds of cultures derived from local regions, making it one of the most diverse countries in the world.

Straddling the equator, situated between the continents of Asia and Australia and between the Pacific and the Indian Oceans, it is as wide as the United States from San Francisco to New York, equaling the distance between London and Moscow. Total population is more than 215 million people from more than 200 ethnic groups.

So, it`s easy to understand the motivations of their global promotion campaign “Wonderful Indonesia”, a country with such a great variety of offers to the visitor. It has been the slogan since January 2011, directed by the Indonesian Ministry of Culture and Tourism. The concept highlights Indonesia’s “wonderful” nature, cultures, people, food, and value for the money. After the campaign was launched, Indonesia reported a steady increase of foreign visitors.

Among the most well-known islands are Sumatra, Java, Bali, Kalimantan (formerly Borneo), Sulawesi (formerly Celebes), the Maluku Islands (or better known as Moluccas, the original Spice Islands) and Papua. Then, there is Bali “the world’s best island resort” with its enchanting culture, beaches, dynamic dances and music.

According with the Ministry of Tourism of Indonesia, interviewed by OTDYKH team, the top three popular local destinations for Russian tourists in Indonesia are Bali, Jakarta, Bintan & Batam islands located near Singapore. In 2018 Indonesia expects to welcome around 150,000 tourists from Russia.

But Indonesia still has many unexplored islands with grand mountain views, green rainforests to trek through, rolling waves to surf and deep blue pristine seas to dive in where one can swim with dugongs, dolphins and large manta rays.

Because of its location and geology, Indonesia is blessed with the most diverse landscape, from fertile rice lands on Java and Bali to the luxuriant rainforests of Sumatra, Kalimantan and Sulawesi, to the savannah grasslands of the Nusatenggara islands to snow-capped peaks of West Papua.

Her wildlife ranges from the prehistoric giant Komodo lizard to the Orang Utan and the Java rhino, to the Sulawesi anoa dwarf buffalos, to birds with exquisite plumage like the cockatoo and the bird of paradise. This is also the habitat of the Rafflesia the world’s largest flower, wild orchids, an amazing variety of spices, aromatic hardwood and a large variety of fruit trees. Underwater, scientists have found in North Sulawesi the prehistoric coelacanth fish, a “living fossil” fish, predating the dinosaurs living some 400 million years ago, while whales migrate yearly through these waters from the South Pole.

TiuKelep Waterfall at Lombok, according to tourists and visitors, one of the most impressive in the world.

Culturally, Indonesia fascinates with its rich diversity of ancient temples, music, ranging from the traditional to modern pop, dances, rituals and ways of life, changing from island to island, from region to region. Yet everywhere the visitor feels welcomed with that warm, gracious innate friendliness of the Indonesian people that is not easily forgotten.

Facilities-wise Indonesia’s hotels are second to none. In fact, many of its luxurious and unique hotels have constantly been listed as some of the best in the world, located on white sandy beaches, overlooking green river valleys, or situated in the heart of busy capital Jakarta. While Indonesia’s cities like Jakarta, Bandung, Surabaya, or Makassar are a hive of activities for business and leisure and a paradise for shoppers, offering upscale boutiques selling top brand names, to local goods at road-side stalls. Here gourmets can treat themselves to the many regions’ delectable spicy cuisine or dine sumptuously at international restaurants. And for sheer relaxation, Indonesia Spas are a great opportunity to reinvigorate both body and mind.

Convention centers are equipped with state-of-the-art facilities, as many top international conferences and exhibitions are held in Jakarta, Bali to Manado, ranging from the Global Climate Change Conference in Bali to the World Ocean Conference in Manado , to trade and investment exhibitions and tourism trade shows in many provincial capital cities.

Again, according with the OTDYKH team interview, the Ministry of Indonesia explained the flight program 2018 from Russia to Indonesia: “At the moment there are only non-direct regular flights between Russia and Indonesia, operated by following air carriers: Singapore Airlines, Emirates, Qatar Airways, Thai Airways, China Eastern and number of code-share flights operated by Aeroflot.”

“The Ministry of Tourism is ready to support the initiative of Russian tour operators to organize charter flights from Russia to Indonesia by providing incentives for each passenger. Launch of the direct flight at least on the route Moscow-Denpasar is highly possible within the nearest future.”

According to the latest statistics quoted by the Ministry, 39,910 Russian tourists have visited Indonesia in January-March 2018. The most popular destination is Bali with 35,689 travelers from Russia, the capital of Indonesia, Jakarta (2,599) and Riau islands, Bintan and Batam (753). In the meantime, the geography of destinations is expanding y-o-y, a growing number of tourists are visiting Medan, Yogyakarta and Lombok island. Travelers from Russia become more informed and experienced in Indonesia.

Tourism in Indonesia is an important component of the Indonesian economy as well as a significant source of its foreign exchange revenues. The vast country of sprawling archipelago has much to offer, from natural beauty and historical heritage to cultural diversity.

According to the World Travel and Tourism Council, the direct contribution of travel and tourism to Indonesia’s GDP in 2014 was IDR 325,467 billion (US$26,162 million) constituting 3.2% of the total GDP. By 2019, the Indonesian government wants to have doubled this figure to 8 percent of GDP and the number of visitors needs to double to about 20 million. The tourism sector ranked as the 4th largest among goods and services export sectors.