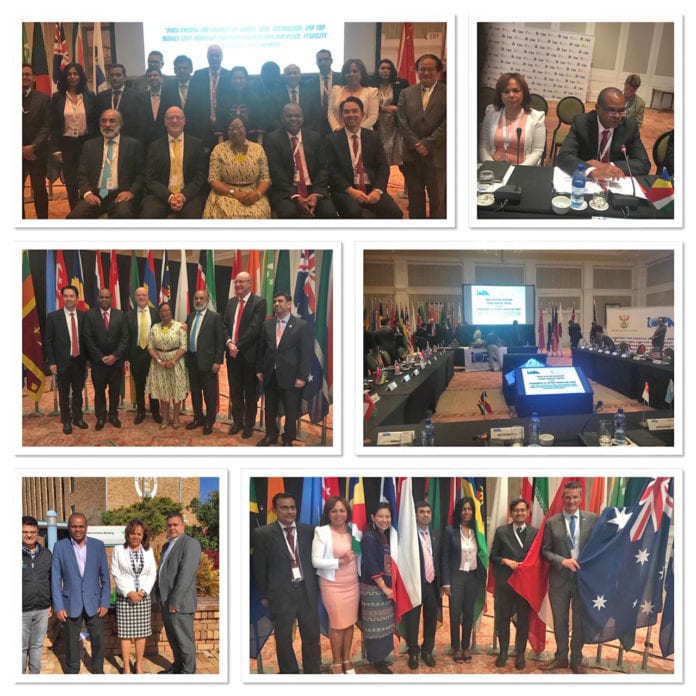 The aim of the meeting was to establish an IORA Core Group in Tourism.  A proposal for the establishment of a Tourism Core Group was made within the framework of the First IORA Tourism Ministerial meeting that was held in 2014 in Seychelles.  Tourism Ministers and experts attending the meeting recognised the need to set up a Tourism Core Group that would aim at strengthening regional tourism cooperation in the Indian Ocean.

The Ministers’ Meeting held on 23rd October 2018 was preceded by a two day meeting of Senior Officials of the IORA countries.  Mrs. Anne Lafortune, Principal Secretary for Tourism participated in the Senior Officials Meeting.  The senior officials were tasked to develop the draft Terms of Reference for the IORA Tourism Core Group as well as the draft work plan of action for the next 3 years.

The IORA Tourism Ministers also discussed and adopted the Nelson Mandela Bay tourism declaration that would provide direction for future cooperation and creation of a common vision to stimulate tourism and travel growth within the IORA region.  It shall take into account the importance of sustainable tourism through the development of green tourism, the way forward in developing coastal and marine tourism with a special focus on cruise tourism through close cooperation between member states; in promoting the Indian Ocean region as a competitive tourism destination, in encouraging tourism capacity-building programme including community-based tourism for poverty reduction, cultural heritage and eco-tourism, and shall also indicate the need to improve connectivity to sustain tourism growth in the region.

The IORA Tourism Ministers’ meeting ended with remarks from Ministers of member states present.  In his remarks, Minister Dogley congratulated the senior officials for the comprehensive work plan of the tourism core group and gave his commitment that Seychelles will participate fully in the development and implementation of the activities as Seychelles stand to gain from them.  In particular he placed emphasis on the strategic objective for the development of cruise tourism in the IORA region and noted that Seychelles will be taking a leading role in achieving the objective.  He also emphasised on the objective of service excellence and capacity building through hospitality exchange programme between member states.

During his visit, Minister Dogley took the opportunity to visit the Port of Port Elizabeth and was briefed on the management of cruise ships undertaken by the Port.