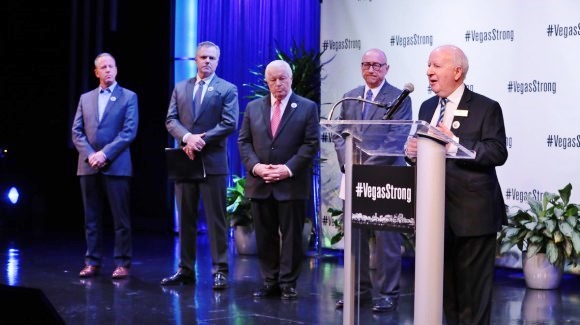 The seventh edition of IMEX America opened earlier today at the Sands Expo in Las Vegas. Although the preshow week was marked by tragedy in the city, from the moment the doors opened on the leading trade show for the US and global meetings industry, it was clear that North American and international planners, executives and suppliers had turned out in force.

With a record 3,300 exhibiting companies the IMEX show floor represents a truly global showcase of suppliers, including all of the world’s largest hotel groups, mature and mid-sized cities from across North America, Europe, South America, Russia, India, China and Africa, destination marketing companies, convention bureaus and agencies. The number of incentive travel and promotional incentive exhibitors has also increased.

As the show opened, pre-booked appointments between buyers and exhibitors were tracking slightly higher than in previous years. Carina Bauer, CEO of the IMEX Group said: “Appointment numbers are an important measure for us and our appointment-led business model is an asset for both buyers and suppliers. By arranging appointments in advance, frequently based on an RFP or event specification, we can see how much business is conducted across the week. And we know from experience that appointments at IMEX frequently lead to big deals, sometime two and even three years down the line.”

Michael Unanue of the Stein Eriksen Collection of hotels said: “Today has been phenomenal. I’ve already got 10 RFPs. We’re meeting decision-makers ready to place business. The quality of buyers here is superb.”

Hosted buyer Chris Brown of the National Association for Law Placement, based in Washington DC, came to meet shortlisted venues for the 2023 convention and look out for destinations for future meetings. “This is the perfect place to progress event projects, having face to face meetings with everyone I want to see all under one roof. I can also arrange my appointments around interesting education sessions. It’s ideal.”

Andrew Lavelle of the World Association for Disaster and Emergency Medicine said: “There are many new technology ideas here that I didn’t know about and it helps to talk them over one to one and have them demonstrated to me. It’s been a really good day.”

With a record-breaking 250 education sessions on offer all week, the majority of which count towards CMP Certification, IMEX attendees were not short of choice or opportunity on day one.

Education highlights included the MPI Academy’s “How meeting planners can change the world” and “Act like a planner, think like a hotel” with Jasmine Eldeen of HelmsBriscoe. The first day was also strong on technology. Tahira Endean, Event Producer for BC Innovation Council offered planners detailed insights into current event tech plus guided Tech Tours. Other tech sessions included “Event networking 21st century style” with Laura Welsh, CEO of Conference Scheduling Solutions and “Why are you still not snapchatting?” with Tara Thomas, CEO of The Meeting Pool, who also presented “How to host a tech bar.”

The #IMEXpitch rounded off the day’s technology focus with finalists Mixtroz, Sciensio, AtlasRTX, Bizly and Snöball competing for judges’ votes, free exhibition space and audience praise. The competition was ultimately won by EventBots by Sciensio. Meanwhile at the TechTribe booth dozens of women in events gathered for an end of day happy hour.

The #IMEXpitch rounded off the day’s technology focus with finalists Mixtroz, Sciensio, AtlasRTX, Bizly and Snöball competing for judges’ votes, free exhibition space and audience praise. The competition was ultimately won by EventBots by Sciensio. Meanwhile at the TechTribe booth dozens of women in events gathered for an end of day happy hour.

Earlier in the day an audience of over 500 gathered in the Sands Showroom to hear meetings industry leaders speak about #VegasStrong, the campaign created following the tragic events of October 1st. Ray Bloom, IMEX Chairman, was joined on stage by Jim Murren, Chairman and CEO of MGM Resorts International, Roger Dow, President and CEO of the US Travel Association, Rossi Ralenkotter, President and CEO of the LVCVA and David Peckinpaugh, President Maritz Global Events. Murren told the audience “We are heart-broken but not broken” and reminded them that “People here have a job because of you. Meetings and conventions are the backbone of this city. Without them everything else falls away.” Ralenkotter spoke movingly about changing the way he describes the 43 million visitors who come to the city each year as “43 million friends” due to the huge outpouring of support the city had experienced over the past week.

“Strength is our promise for tomorrow”

Echoing the words of the #VegasStrong campaign – “Strength is our promise for tomorrow” – IMEX America will open tomorrow with the #IMEXrun at 6am followed by the 150th IMEX-MPI-MCI Future Leaders Forum and important news announcements from several exhibitors, including SMG World, Royal Lancaster Hotel London, the Department of Sport and Tourism Moscow, Event Mobi, Ovation Global DMC and Tourism New Zealand.