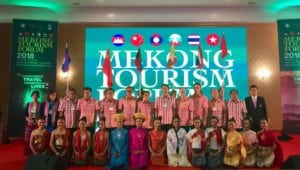 No stranger to tourism HE Ittipol Khunpluem was the former mayor of Pattaya and was appointed Vice Minister of Tourism in April 2018.

This annual event draws tourism decision makers from the six countries of the Greater Mekong Sub-region and is being held from the 26 to 29 June at Nakhon Phanom university with the theme of ‘Transforming Travel – Transforming Lives.