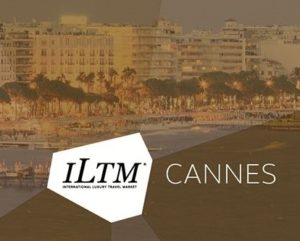 The 16th edition of ILTM took place last week in Cannes and featured 1670 exhibitors – an increase of 3% – and 1662 buyers from 75 countries – a 10% increase year on year. There was a significant increase in hosted luxury travel agents from the US (+15%) this year and 10% more attended from France and Northern Europe.

Honoring their commitment to host increasing numbers of new buyers at all ILTM events, 45% of those hosted at ILTM last week were new faces to ILTM in Cannes. A total of 66,292 appointments took place throughout the week, an increase of 9.5% year on year, not including the many other meetings that took place at receptions, parties, lunches or even on the show floor or on the Croisette.

For the buyer attending ILTM, the event is all about finding something new. Amy Furie Director of Leisure New Act Travel LA commented:

“I am a veteran of ILTM in Cannes and I come because I meet fantastic new suppliers every year. If I am invited again, I would accept 100% and if I could only go to one show a year it would be this one!”

“ILTM was like being a 10 year old at FAO Schwartz!” and Robin Leggett of Zell Travel said:
“Finding those ‘gems’ that I did not know anything about before or getting to know suppliers that I should know better is perhaps the best part of ILTM Cannes.”

For exhibitors, ILTM is about building business and business connections.

“The energy created at ILTM Cannes is palpable from the moment you arrive and it carries through the entirety of the event,” said Chris Austin, senior vice president for Global Marketing & Sales at Seabourn. “This was the first year Seabourn has exhibited and the connections we’ve made with buyers and suppliers will be invaluable in the months ahead.”

“ILTM Cannes is the best show by far for delivering new business, it’s all about introducing new properties, updating clients on changes to existing ones and maintaining the well established booking channels. I would imagine that between some 32 hotels represented here, we will create hundreds of thousands of dollars of business and will do the same when we return in 2018. The ILTM portfolio of shows is one of the most crucial investments we make each year for the brand.”

Alex Vigil of Visit California added: “This has been an even better 2nd year at ILTM for Visit California. We brought even more partners to help define our landscape which has meant great quality meetings throughout the show. We’re looking forward to next year already.”

“This is our 13th year and we have seen the show grow and go from strength to strength. Buyers are engaging and we’ve seen fresh faces from global luxury markets – ILTM gives us a platform to create opportunities and target regions contributing to our business growth and we look forward to partnering with ILTM throughout 2018.”

And Jeanette Thottrop of Borgo Santo Pietro in Tuscany concluded:

“ILTM in Cannes is vital for us – it has been essential in the growth of our exclusive property and more recently, our brand extensions. We meet so many good friends and important connections as well as a constant number of new and influential buyers and press each year. It is unmissable!”

“ILTM’s success is the industry’s success. ILTM 2017 has been defined by announcements of many new launches and many growing luxury travel businesses across the world that truly sets the scene for the ILTM Collection in 2018. This includes our two new events ILTM Asia Pacific and ILTM China and our two rebranded events ILTM Latin America and ILTM North America, not forgetting ILTM Arabia and ILTM Africa. It is set to be a busy year for the industry and we look forward to supporting in every way that we can.”