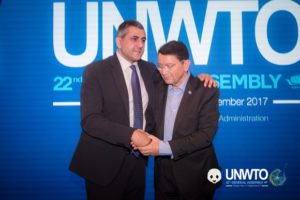 Holiday party at UNWTO: New boss showed up and left everyone in suspense

Linda HohnholzDecember 18, 2017 3:17 am 0
Taleb Rifai and Zurab Pololikashvili in Chengdu, China at the UNWTO General Assembly

The holiday spirit at the World Tourism Organization (UNWTO) in Madrid is dramatically different this year. On Friday the 100+ UNWTO staff gathered for their traditional and annual holiday party lunch in Madrid.Taleb Rifai and, all directors and the rest of the 100+ staff many with their spouses attended and were anxious to hear about what’s next for the UN special agency and their job.

The lunch was also a farewell to Taleb Rifai from Jordan, the current secretary-general, who had steered the organization with a heart, talent and success like never seen before over the last eight years.

In less than two weeks on January 1,2018,  the new UNWTO Secretary-General Zurab Pololikashvili from Georgia will be in the driver seat for world tourism, and this is becoming an uncomfortable reality for many these days.

Friday was a last chance for Zurab Pololikashvili to put his upcoming staff at ease and to say a word of thank you to Taleb Rifai, his future predecessor. After all, without Rifai’s support for Zurab, the outcome of the recent election for SG could have been very different. Without a doubt, Zurab Pololikashvili has a lot to be thankful for when it comes to Taleb Rifai.

Zurab Pololikashvili has not been attending very many meetings or events after his confirmation in September, so hopes were high on Friday when he showed up for the holiday party.

There are so many questions, about Zurab’s plans are for the new UNWTO. Many of the staff were anxious to learn about any changes in leadership or wanted to be put at ease about their own future role.

“You can see the sign of relieve on many faces when Zurab was spotted”, someone attending the lunch told eTN.

Everyone was ready to hear Secretary General-Elect Zurab Pololikashvili speak, but instead, he got up early and left quietly without saying a word. No thank you to Taleb Rifai, no happy holidays to the staff, and no word on what his plans are for 2018.