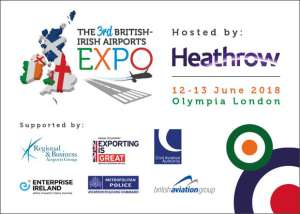 – The British-Irish Airports EXPO is the biggest-ever UK airports trade show attracting 160 exhibitors, and up to 3,000 visitors

– Heathrow’s spokespeople will be joined by key political figures such as Baroness Sugg, David Blunkett and other aviation industry experts as they speak at five specialist conferences over two days

Heathrow Airport will host this year’s British-Irish Airports EXPO at Olympia London on 12-13 June 2018. The EXPO, which is the biggest trade show specifically dedicated to UK and Irish Airports, is set to have over 160 exhibitors and up to 3,000 visitors.

The event will see key figures from the British and Irish airport community discuss a range of topics including connectivity, infrastructure development and accessibility. This year’s EXPO will include the annual conference of the Regional And Business Airports Group (RABA).

Over 70 key figures in the aviation industry, including Heathrow CEO, John Holland-Kaye, Aviation Minister, Baroness Sugg, Lord David Blunkett and easyJet Group Director of Strategy and Network, Robert Carey will contribute to sessions at one of the following five conferences:

Heathrow CEO, John Holland-Kaye said: “Heathrow is excited to be hosting the 3rd British-Irish Airports EXPO. As the UK’s gateway, Heathrow plays a key role in the country’s aviation industry and it’s great to have this opportunity to showcase the work being done both within our airport and across the sector. Collaboration like this is essential if Britain and Ireland are to secure the connectivity needed to thrive post-Brexit.”

– The Department for International Trade’s ‘Exporting is GREAT’ campaign

Entrance to the EXPO and all conference stages is entirely free-of-charge to all airport trade visitors and airport stakeholders.