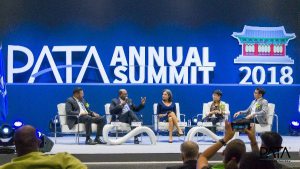 Generously hosted by the Korea Tourism Organization (KTO) and Gangwon Province, the event included the Association’s executive and advisory board meetings, annual general meeting (AGM), PATA Youth Symposium, PATA Insights Lounge, the UNWTO/PATA Leaders Debate and a one-day conference that explored the various connections that are helping to shape the travel and tourism industry as it moves towards a more exponential future.

“The PATA Annual Summit is a unique opportunity for us to highlight the issues that are affecting our industry, and for our delegates from both the public and private sector to come together to addresses the challenges and opportunities facing our various organisations,” said PATA CEO Dr. Mario Hardy. “The theme for this year’s summit, ‘Building Bridges, Connecting People’, is timely in the aftermath of two significant events for the Republic of Korea: the 2018 Winter Olympics and Winter Paralympics, and the April 2018 inter-Korean Summit. These two events clearly demonstrate the importance of connecting and collaborating with each other to build a better world.”

During the one-day conference on May 18, delegates were given the unique opportunity to hear from former Secretary General of the United Nations, H.E. Ban Ki-moon during a special keynote session which also featured a one on one interview with BBC World News Presenter & Producer, Sharanjit Leyl.

Throughout his speech, Mr. Ban stressed the importance of cooperation and collaboration in tackling the world’s most pressing issues and the significance of the tourism industry as not only a leading economic sector but as a vehicle in fostering multicultural understanding and empathy. Many delegates were also inspired by his thoughts on standing up for those unable to do so on their own and the need to “not leave any one behind”, as well as his opinions on the need for greater gender equality – a primary advocacy issue of the Association in 2018.

During the day, delegates also heard from a diverse lineup of international thought leaders and industry shapers on various topics including ‘Connecting Communities: Harmonising Local Interests with Global Sustainability in Tourism Development’, ‘A case study of Korean local tourism development’, ‘Designing Intermodal Connectivity for Destination Competitiveness’, and ‘Connecting Generations’, and ‘Bridging the Gender Gap’, ‘The New Way to Connect’, and ‘The Human Touch in a Digital Marketing World.

As part of the PAS 2018 programme, PATA once again organised the UNWTO/PATA Leaders Debate in partnership with the World Tourism Organization (UNWTO) on May 19. The debate, moderated by BBC World News Presenter & Producer, Sharanjit Leyl, addressed two current challenges affecting the tourism industry: resilience and crisis management, and tourism over capacity, and which one of these issues was more pressing for the industry to address.