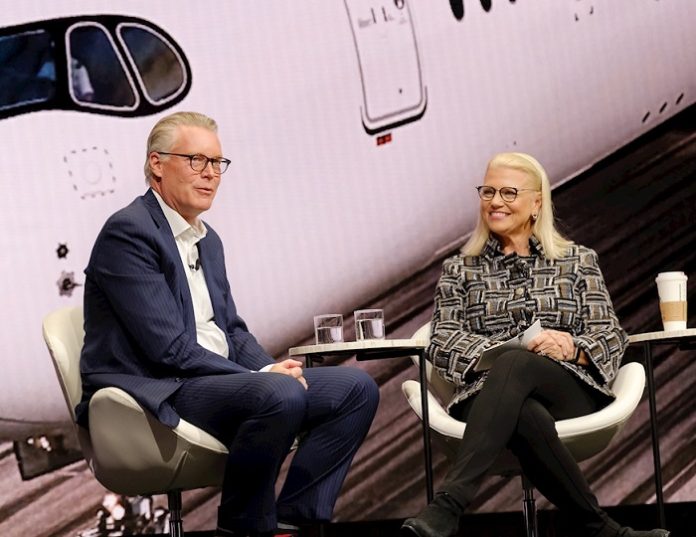 Delta CEO Ed Bastian told the tech world Tuesday that Delta’s goal is to make travel something customers don’t have to endure, but a magical experience.

He shared some of the ways Delta is making that happen with a capacity crowd of 2,600 at the annual Consumer Electronics Show, the world’s largest and most influential technology event. Ed joined Ginni Rometty, President and CEO of IBM, in Las Vegas as part of her opening keynote address on what’s next in the world of data.

Bastian said data is helping Delta to build relationships with its nearly 200 million annual customers by giving the airline’s 80,000 employees more meaningful information at their fingertips about any customer.

“We have a culture of service that’s in our DNA, and our people love to serve people,” he said. Offering personalized service to customers is core to Delta’s brand, he said.

Bastian and Rometty also talked about the impact of weather on global business. After Rometty announced an innovative weather platform to improve forecasting around the world, she and Bastian talked about the benefit of reducing turbulence: a safer, more comfortable flight.

Rometty invited Bastian to share Delta’s perspective on revolutionizing the airline industry through technology that supports both employees and customers. Topics included projects IBM and Delta have explored together, including RFID bag tracking technology, using the power of machine learning to serve up customer insights to employees so they can engage more meaningfully with customers, and ways blockchain technology could benefit temperature-sensitive cargo shipments.

Separately, Bastian shared thoughts on innovation with Nicholas Thompson, Editor-in-Chief of Wired, who posted a video of their chat on LinkedIn.

Under Bastian’s leadership, Delta is transforming the air travel experience with generational investments in technology, aircraft, airport facilities and Delta’s employees worldwide. The global carrier has led the industry on a number of customer solutions including launching the first biometric terminal in the U.S. that uses facial recognition at each checkpoint, automatic check-in and RFID bag tracking via the Fly Delta mobile app, assistance and recognition on the go with mobile agent and flight attendant tools, a cross-industry alliance that will empower customers with a seamless in-cabin connectivity experience, and a groundbreaking app that helps Delta pilots avoid turbulence for a more comfortable flight.

During Bastian’s tenure as CEO, Delta has been named the Wall Street Journal’s top U.S. airline; Fortune’s most admired airline worldwide; the most on-time global airline by FlightGlobal; a Glassdoor Employee’s Choice company; a Fast Company Most Innovative Companies Worldwide, and more. In 2018, Fortune magazine named Ed among “The World’s 50 Greatest Leaders.”

Other speakers joining Rometty on the CES main stage included Charles Redfield, E.V.P. of Food for Walmart; and Vijay Swarup, V.P. of R&D for ExxonMobil.