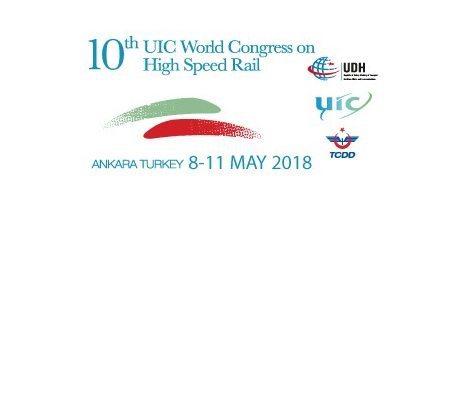 The 10th World Congress on High Speed Rail organised by UIC, the worldwide railway organisation, and TCDD, Turkish State Railways, opened on 8 May in Ankara in the presence of around 1,000 participants from the rail and transport world representing 30 countries.

During the course of three days, exchanges and debates between all actors of High Speed Rail from all parts of the world are focusing on the overall theme ‘Sharing knowledge for Sustainable and Competitive Operations’.

(Ankara, 9 May 2018) The 10th World Congress on High Speed Rail jointly organized by UIC – the worldwide railway organisation bringing together 200 members from 100 countries and all five continents – and Turkish State Railways TCDD, opened on 8 May in Ankara, Congresium Convention Centre, in the presence of around 1,000 participants representing 30 countries.

After Japan in 2015, Turkey was selected to hold this 10th edition of the World Congress on High Speed Rail as it is located at the crossroads of Europe, Asia and the Middle-East, a region marked by a very rapid and dynamic expansion of the rail transport systems, with a strong focus on high speed rail lines.

The opening ceremony of this unique world event entirely dedicated to the development of high speed rail, took place under the high patronage of the Prime Minister of the Republic of Turkey, Mr Binali YILDIRIM, and with the presence of the Minister of Transport, Maritime Affairs and Communications, Mr Ahmet ARSLAN. For UIC, Mr Renato MAZZONCINI, CEO of Italian Railways FS Italiane, UIC Chairman, as well as Mr Jean-Pierre LOUBINOUX, UIC Director-General, and as the Host of the world congress, Mr Isa APAYDIN, President of the Board and Director-General of TCDD, UIC Vice Chairman, addressed the participants.

The World Congress ‘Ankara 2018’ welcomes all actors committed to the development and operations of high speed rail systems all around the world, including international organisations and financial institutions, governments, UIC Member railways, manufacturers, research bodies, partners and service providers.

The overall theme in 2018 is ‘Sharing knowledge for Sustainable and Competitive Operations”.

In his address, UIC Chairman Mr Renato MAZZONCINI declared: “While high speed is well understood and appreciated by the countries which have invested in it, it is not always well understood as a whole transport system for other stakeholders, so this 10th World Congress intends to make clear how High Speed Rail is an innovative, efficient and environment respectful mode of transport, which could be easily described as the transport mode of the future.

High Speed Rail means high performances. All these performances originate first from the complex systems, in which are combined so many different fields as infrastructure, stations, rolling stock, operations, maintenance, strategy, financing, marketing and management, contributing each of them to bring excellence and improvements.

All these issues will represent the core of these four Congress days, where, through the different Parallel Sessions and Round Tables, speakers and attendees will exchange their views increasing knowledges, technologies and experiences.

The Congress together with its worldwide dimension represent today an emblematic stage of the globalising world that the railway system is facing.”

Mr Isa APAYDIN, President of the Board and Director-General of TCDD, UIC Vice Chairman, underlined: “As you all know, in a world where mobility, speed and punctuality are of utmost importance, the requirements for developing and expanding high speed train technologies which realise safe, fast and environmental friendly the passenger transportation with high capacity approaches is increased with each passing day.

Today, about 41,000 km of high speed lines are operated all around the world. This figure will be increased to 98,000 km in the near future with the completion of the lines under construction and lines planned to be constructed.
During the congress and within the framework of the “Sharing Knowledge for Sustainable and Competitive Operations” motto, we will focus on how to reduce the construction and maintenance costs and how to retain its longevity as much as constructing high speed railway lines.

Within the scope of sustainable operations, we will also focus on finding answers for questions like how to provide sustainable maintenance management and how to compete with other modes of transportation by reflecting this on ticket prices.”

As Jean-Pierre LOUBINOUX, UIC Director-General , emphasised in his opening address, “Every two or three years, the UIC World Congress on High Speed rail provides a unique opportunity to exchange between all members – those who already operate high speed rail systems and those who plan to introduce high speed in a near future – as well as between railways and their stakeholders and partners from the manufacturing industry, the finance and business world, on the best practices and opportunities for optimising in the future this type of fast, safe, competitive and sustainable transport system”. This event and the exchanges taking should in Ankara be beneficial to the entire railway world community and illustrate the core values of UIC of Unity, Solidarity and Universality, in a spirit of sharing, openness and connection”. He added: “As a window, as a totem, of modern high technology, the development of high speed is the expression of the ambition and vision of a nation, in terms of land planning and a response to the demographic, economic and social challenges of modern times. Accelerating time and shrinking space, high speed can contribute to the growth of mobility, to the exchanges between cities, to the desaturation of other infrastructures, to sustainable development goals for society, to the unification of regions, maybe to some extent to create peaceful international links between countries.”

The inauguration and the visit of the trade exhibition (with 50 exhibitors) by all officials and attendees ended the first part of the Opening Ceremony.

The second part of the Opening Ceremony began with the presentation of the programme that was designed with the objective to be paperless and extremely interactive, in particular through exchanges between speakers and the floor with smartphones. This presentation was jointly made by Mr Michel LEBOEUF, Honorary Chairman of UIC High Speed Rail Committee and Dr Fatih SARIKOÇ, Deputy Head of the Modernisation Department of TCDD.
Then, Mr Marc GUIGON, Director of UIC Passenger Department, presented a journey across the world illustrating the main High Speed Rail implementations.

After the official opening ceremony and following ’opening discussions’ involving high level railway representatives, the discussions will be organised in the form of parallel sessions and of three round tables in plenary session, co-chaired and co-moderated by leading personalities of the international railway and transport world, respectively dedicated to the themes:

The closing session on 10 May will be dedicated, among other themes, to the perspectives of Digitalisation, cooperation with start-ups and students, the alliance with universities and it will provide an overview of ambitious projects of high speed rail developments around the world.