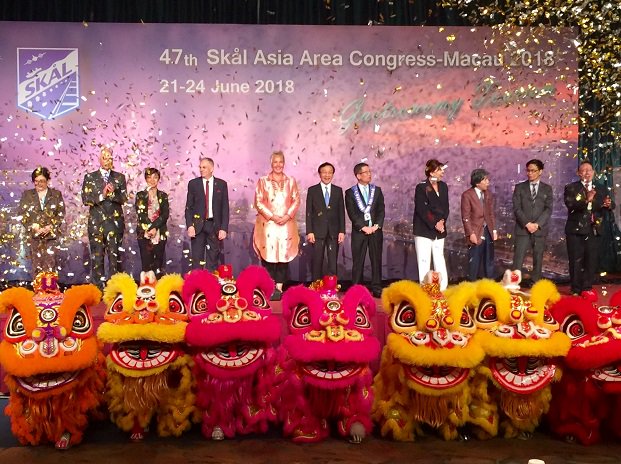 47th SKAL Asia Congress opens with a bang in Macau

He went on to say, “It is a great pleasure to welcome you all, on behalf of the Skal Intl Asian Area. From Skal Intl, World President Susanna Saari and CEO Daniela Otero, also two SI past Presidents, Uzi Yalon and Richard Hawkins, SI Director, Peter Morrison, two SI past Directors Jason Samuel & Andrew Wood and SI past Asia President Gerry Perez.

“On behalf of the Asian Area Committee, I thank all delegates who have taken their time to be at this Congress. I especially thank Mr Antunes, President of Skal International Macau and his team who have worked very hard to make this Congress the most successful and memorable one, in view of its quality program and the number of participants. As far as I know, this Macau Congress has recorded the highest number of international delegates in recent years. This is the result of the hard work put in by President Antunes and his team.

“We are eagerly looking forward to hearing the speeches to be made by renowned keynote speakers and industry professionals like Dr Mario Hardy, PATA CEO; Dra. Maria Helana de Senna Fernandes, Director of MGTO, Khun Chattan Kunjara Na Ayudhya, Deputy Governor of TAT, Mr Grant Bowie, CEO and Executive Director of MGM China Holdings, and our very own Young Skal Members and Director Dushy Jayaweera. Their valuable words will go a long way in making this 47th Asian Congress all the more enriching. 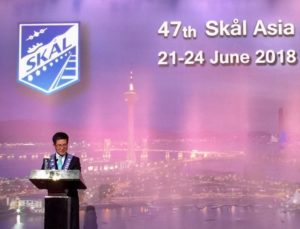 “Among the regional areas of Skal International, the Skal Asian Area commands the largest area, stretching for more than 10,000 km from Guam in the Pacific region to Mauritius in the Indian Ocean.

“Asia is the only area in the world where Skal Intl is experiencing strong growth. In the Asian region, we achieved an increase of 14.7% in the number of members, compared to one year ago and currently there are about 2,400 members in 41 Clubs in Asia. This should be noted, since especially the number of members worldwide has decreased. The newest Club No 726, Trivandrum from India is also a part of the Asian Area.”

He went on to add, “If you look at the Skal statistics one year ago and today and compare the progress of Skal International and Skal Asia, you will find that in the World, the number of countries that have a Skal Club decreased by one, from 84 to 83 while there was no change to the 19 countries in Asia that has Skal clubs.

“We are also proud to mention that Skal International Delhi took over the mantle of the largest Skal Club in the world. Skal Asia has the potential to grow even further. There are initiatives taking place to open Skal clubs in other countries as well. Lebanon, United Arab Emirates and Vietnam are some of the countries that are interested to join Skal Asia. Also, with the help of President Antunes and the Macau team, I hope that opening of many clubs in China will be a reality soon.

“Skal Intl Macau has already organised the Skal Asia Congress on three previous occasions, initially in 1981 which was co-hosted by Skal Intl Hong Kong, then in 1996 and in 2007. With this Congress, Macao will become one of the five cities which has held that Skal Asia Congress 4 times or more, the others being Manila, Singapore, Bahrain and Colombo.

“All delegates attending this Congress are encouraged to explore the wonderful attractions of Macao, enjoy the diversity of its culture and heritage, experience the hospitality of its people and, above all, indulge into its cuisine in the 2018 Macao Year of Gastronomy,” he concluded. 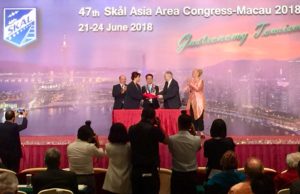 During the opening ceremony there took place the historic signing of an MOU between PATA and SKAL INTERNATIONAL pledging increased co-operation between both associations.