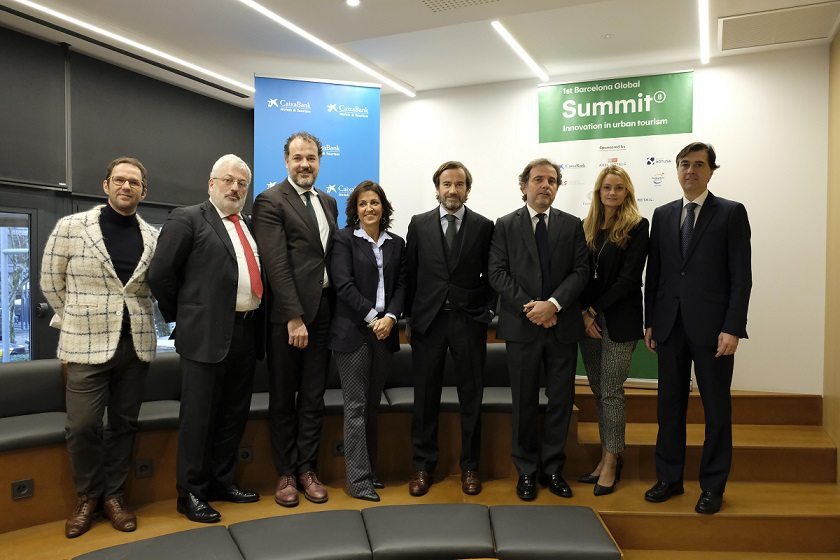 Today Barcelona Global launched the 1st Barcelona Global Summit: Innovation in urban tourism, the first edition of an international congress to be held on Wednesday, March 21st at CaixaForum Barcelona. The goal of the Summit is to host presentations aimed at strengthening the ties between the city and the tourism sector through initiatives designed by the organizers of the event. Following the questioning of Barcelona’s tourism industry and taking into account the impact of last summer’s events, the Summit becomes an opportunity to reflect on the city’s current tourism management model as an engine for economic development, wellbeing and international projection.

The president of Barcelona Global, Gonzalo Rodés, the vice president, Pau Guardans, and the CEO, Mateu Hernández, were in charge of announcing the goals of the Summit. The three representatives of Barcelona Global have analyzed the context of the tourism sector in Barcelona, identifying the challenges that have prompted the entity to organize this congress. The presentation event was also attended by some of the members of the organizing team, which is formed by Ángel Díaz, president of Advanced Leisure Services; Michael Goldenberg, general director for Spain and corporate director of the Value Retail Group; Juan Julià, founder and owner of Axel Hotels; Marian Muro, general manager for Spain of Grupo Julià; Arturo Mas-Sardà, president of PortAventura and Anna Casadellà, project manager of Barcelona Global.

In addition to the members of the organizing team, more than 40 companies and institutions are participants of the Summit, including Caixabank, Laie, Hotusa, La Sagrada Familia, HI Partners, BGB, Abertis and eDreams. This diversity of sectors, companies and perspectives demonstrates the breadth with which Barcelona Global operates to present a set of proposals aimed at strengthening the ties between tourism and the city. The entity highlights tourism as a strategic activity in Barcelona –with a great impact on employment, opportunities, projection and wellbeing–, which fits in with other assets of the city such as technological entrepreneurship, frontier science, culture, industry, logistics and social impact activities, all of them taken into account by the organization chaired by Gonzalo Rodés.
The motivations behind the Summit

Currently, tourism serves as a growth engine for the city of Barcelona, representing 15% of GDP and 10% of employment. Barcelona stands out for its renowned international reputation based on its quality of life, safety, and positioning as a point of reference for areas such as design, creativity, gastronomy, architecture, commerce, sports or music. The city also has top notch infrastructures that foster international connectivity and is well-suited for international conventions. All these factors have enhanced its position of leadership, placing it among the top five destinations for urban tourism in Europe, and as the sixth strongest city brand in the world according to Anholt-GfK Roper City Brands Index.

Due to the importance of this economic activity, Barcelona Global will present a set of proposals aimed at establishing synergies with other productive sectors to optimize the assets of the city and to improve the use of space, mobility and coexistence among visitors and citizens. The proposals will also address brand reputation contingencies derived from the current institutional context.

The proposals of Barcelona Global and the structure of the Summit have been prepared by representatives of the entity’s economic and business partners, with the support of city planner and international consultant, Professor Greg Clark, through several sessions and working groups that began last November, and are based on four major fields of action: generation of new models for offers with added value; diversification of spaces, co-management and creation of new areas of interest; reinvestment of the economic impact of tourism; and the use of new technologies.
The initiatives will be presented at the start of the 1st Barcelona Global Summit: Innovation in urban tourism, after the welcome speech by CaixaBank and the World Travel & Tourism Council.

Barcelona, connected to the world

The main goal of the 1st Barcelona Global Summit is for Barcelona to continue being an international reference, thus invitees include representatives from cities that have been successful in each of the four areas mentioned earlier:

• “Diversification of spaces and creation of new areas of interest”. Presented by Carl Weisbrod from the Planning Department of New York.

• “Technology as a tool to improve the visitor’s experience”. Presented by Geerte Udo, marketing director at Amsterdam Marketing.

The 1st Barcelona Global Summit will begin and end with two presentations by city planner and international consultant, Professor Greg Clark. The initial presentation will be entitled “Urban tourism as a development opportunity”, and will describe the main characteristics of the sector, reflecting on how its assets can be optimized and its externalities minimized. The second presentation will be titled “Relaunching a city after a crisis” and will serve to analyze initiatives that can contribute to strengthen the Barcelona brand.

NEWER POSTACE of MICE: Are you ready for inspiration? The most creative year for your events!
OLDER POSTMAGIC 2018: The Fashion Marketplace in North America to attract 58000
RSS Error: https://travelwirenews.com/rss/ is invalid XML, likely due to invalid characters. XML error: Invalid document end at line 10, column 5