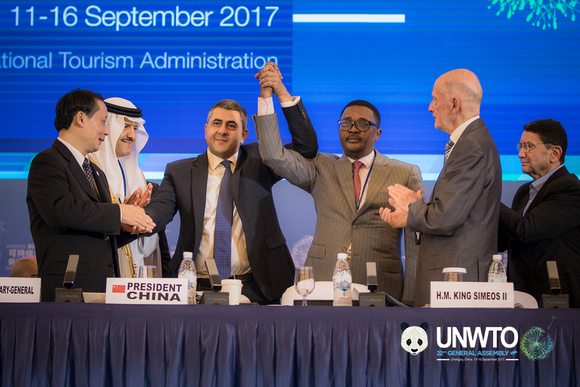 What happened and what is next for UNWTO? The untold story continues…

Unless there is an issue, and this last assembly had a massive issue, all of which required more than a rubber stamp approval of Madrid’s recommendation for who would be the new Secretary-General.

On September 12, the same Executive Council that voted for Zurab at the 106th session of the UNWTO Executive Council met for the last time in Chengdu, to present their recommendation, and to deal with the intervention by Zimbabwe about “irregularities” in the original election for Zurab Pololikashvili.

The Zimbabwe Minister of Tourism and Hospitality at that time, Dr. Walter Mzembi, was very clear and firm of his desire to have this issue discussed at the General Assembly. Put it all out on the table, let the Executive Council decide, was his forthright position.

The understanding was: No rubber stamp, it would be voted on.

This is important, as ordinarily, the vote would be by acclamation. Mzembi was also assured there would be a committee to investigate the entire UNWTO process for future elections. It was strongly hinted to Mzembi he would be asked to spearhead this committee.

So, when the Gambia, during the General Assembly requested the secret ballot,  this country was bullied to withdraw their request. Outgoing Secretary-General, Taleb Rifai, made a large stink about requesting a secret ballot instead of acclamation, claiming in the assembly that this would destroy the unity of the organization.

He wanted the rubber stamp approval, despite the assurances made to Mzembi, this would not occur if anyone asked for a secret ballot. So much for the top-level, closed-door meeting assurances. Supporting Rifai were countries friendly with Georgia, and it appeared they were bullying the Gambia to withdraw their request for a secret ballot. Under immense pressure, Gambia did not want to appear to stand against the rest of the world and did eventually withdraw their request for the secret ballot.

In the meantime, a lobbyist convinced Minister Mzembi from Zimbabwe to accept acclamation. Subsequently, Mzembi walked up to the stage, and all three men – Mzembi, Rifai, and Pololikashvili – shook hands. Bring out the rubber stamp, the election was over.

Chapter two of this sorry story happened a day after the General Assembly when the new 107th session of the newly-elected Executive Council met on September 16 in Chengdu. It was fully expected, as is the long-standing UNWTO tradition for any newly-confirmed Secretary-General to present his deputy, and the rest of his executive team.

Some weeks later the minutes of this meeting were posted to the UNWTO website, yet there is not a single word about the incoming executive team presentation that was being rescheduled. Mysteriously it states the 108th Executive Council meeting will be hosted in Madrid in the first half of 2018.

To spell this out, this maneuver would allow Zurab to set up his team quietly, behind the scenes, without approvals, leaving open the door to much speculation of favoritism and irregularities, which has been a hallmark, if not tradition, of the new Secretary-General of the UNWTO. If this is a sign of things to come, then UNWTO may be heading for autocracy if not a dictatorship.

According to information provided to eTN, Carlos Vogeler, who also ran for the Secretary-General post, was recently terminated as an Executive Director of the UNWTO by Pololikashivili. Other current Executive Directors may have been left in place.

It is not clear what will happen after outgoing Secretary-General, Taleb Rifai, leaves his post. If the termination of Vogelar is any indication, along with the lack of transparency, combined with backroom wheeling and dealing during the election, we as an industry should be very concerned, if not alarmed.

Based on reliable information received, and from reports of multiple clandestine meetings between Pololikashivili and the Chinese delegation before the Chengdu General Assembly, China has a good chance to be awarded the coveted UNWTO Deputy Secretary-General position.

If this occurs, China will have even more global influence after the recent announcement of their own World Tourism Alliance during the UNWTO General Assembly in Chengdu.

Industry observers speculate with Pololikashivili having attended the recent wine conference in Argentina, this South American country will be featured in Pololikashivili’s still unknown executive team. The next WTTC Summit in 2018 will be in Buenos Aires.

The future of UNWTO is very unclear, and transparency within the UNWTO may well be a thing of the past. What is clear, Pololikashivli owes a great deal to Taleb Rifai. Without Rifai’s illogical backing and odd, unwavering support, the candidate from Georgia would not today be occupying world tourism’s top office.

Hopefully, Taleb Rifai will be doing the right thing for UNWTO, and call for this extraordinary Executive Council meeting in January and look at the structure as his last legacy act in the name of good international corporate governance and keeping to his word to the General Assembly.

The future of UNWTO is in the unseasoned hands of Zurab Pololikashvil; the global tourism industry is closely watching, and so is eTN.