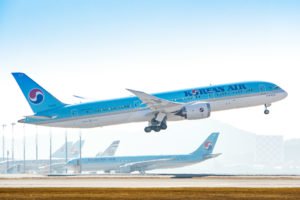 South Korea is excited. Korean Airlines is going all out and is calling the IATA General meeting a UN Conference, because it will be in South Korea next year.

The annual general meeting (AGM) of the International Air Transport Association (IATA), so-called ‘the United Nations Conference on the Aviation Industry’, will be held in June next year in Seoul

It will be the first time that all the CEOs of more than 280 airlines from 120 countries around the world will gather in Seoul at the same time. Officials from Korean Air including Keehong Woo, vice president of Korean Air, attended this year’s annual general meeting

■ ‘The United Nations Conference on the Aviation Industry’

“The aviation industry is looking forward to meeting in Seoul for the 75th IATA AGM. South Korea has a great story to promote. Strategic planning and foresight have positioned the country as a global hub for transport and logistics,” said Alexandre de Juniac, IATA’s Director General and CEO. “I am confident that Korean Air will be a great host as Seoul is transformed into the capital of the global aviation industry during the AGM. We are also delighted to be in Seoul in the same year Korean Air celebrates its 50th anniversary.”

The Korean aviation industry is expected to become even more prominent as major concerned parties in the world’s aviation industry come to Korea. In addition, the IATA AGM will serve as a chance to exhibit the beauty and tourism infrastructure of Korea to the world. A boom in tourism, which will create additional economic effects and job positions, is also expected.

■ The elevated influence of Korean Air and the Korean aviation industry stands as the background for hosting the event. Korean Air’s Chairman Yang-Ho Cho’s prominent role has also worked as a significant factor.

IATA, established in 1945, is an internationally cooperative organization with 287 private airlines from 120 countries. Its dual headquarters are located in Montreal, Canada and Geneva, Switzerland, and it has 54 offices in 53 countries around the world.

The association represents the development and interests of the aviation industry, such as policy development, regulation improvement, and business standardization in the international aviation industry. It also runs an audit program, IOSA (IATA Operational Safety Audit), to intensify flight safety.

Korean Air’s selection as the airline to host the next IATA AGM is a result of the airline’s role within IATA and the extended status of the Korean aviation industry. Joining IATA as the first airline member from Korea in January 1989, Korean Air will celebrate its 30th anniversary membership in next year. The airline has also served as a key member of four committees among the six IATA Industry Committees.

In particular, Chairman Cho Yang-ho has been leading IATA’s core decisions on major strategies, detailed policy directions, annual budgets and membership qualifications by serving as a member of the Board of Governors (BOG), a member of IATA’s top policy review and decision committee, and a member of the Strategy and Policy Committee (SPC).

Since the CEO of the hosting airline will act as the Chairman of the IATA AGM, Chairman Cho Yang-ho of Korean Air will chair the next IATA AGM to be held in Korea.

In addition, Korean Air will play a leading role in deciding on direction of the airline industry in 2019 by preparing a forum to exchange information regarding trends and changes in the global aviation industry, through various events taking place in the AGM.

Korean Air will also host the Association of Asia Pacific Airlines (AAPA) presidents’ meeting in Korea this coming October. By hosting major international air conferences such as the AAPA presidents’ meeting this year and the IATA AGM next year, Korean Air has been provided with great opportunities to secure its role as a leader in the global aviation industry.