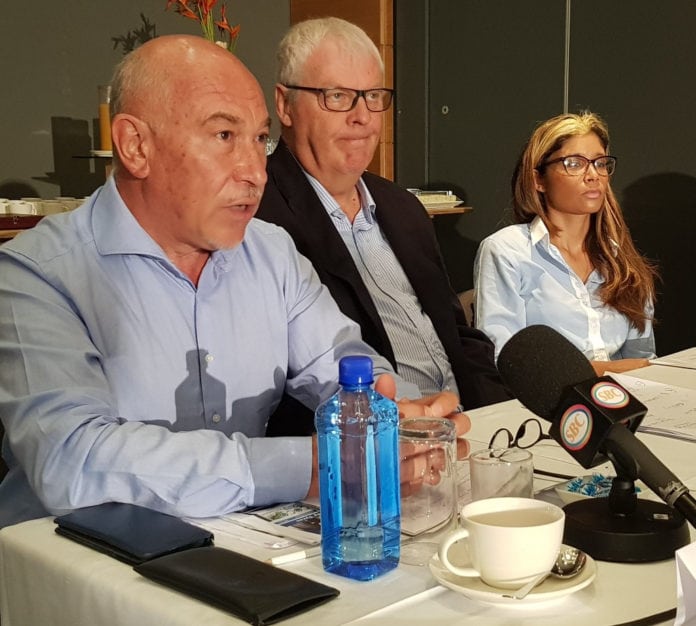 The Indian Ocean Vanilla Island of Reunion is organizing an International Meeting on Sustainable Development from the 21 to the 23 November 2018. The 1st Vice President of the Club Export Reunion, Mr. Francois Mandroux was in Seychelles with a Reunion Delegation to impress on the Seychelles Government and island’s Private Sector Trade on the importance for Seychelles to be present alongside the other Indian Ocean Vanilla islands of Mauritius, Madagascar, Comoros and Mayotte as well as coastal states from the African mainland such as South Africa and Mozambique to name but a few and countries from the Asian block.

H.E. Lionel Majeste-Larrouy, the French Ambassador in Seychelles was present at meetings at Eden Bleu Hotel with Francois Mandroux, the 1st Vice President Club Export Reunion and his delegation. H.E. the French Ambassador has been personally behind the development of more trade between the islands and Reunion which today sees Seychelles exporting more to Reunion that vice versa. The Seychelles private sector trade was represented by Iouana Pillay, the SG of the SCCI (Seychelles Chamber of Commerce and Industries) and Madame Pillay has echoed her support for the November meeting in Reunion which will see ten Seychellois Companies and the local press invited through the SCCI to join Regional partners at the International Meeting in Reunion. The Sea Weed fertilizer Business of Bernard Port Louis in Baie Ste Anee Praslin was one product tabled and discussed as an example of needed products for Reunion’s sugarcane plantations that could be exhibited in this November meeting.

The Club Export of Reunion Island is celebrating its 20th Anniversary since it was launched and rallies the private sector trade that targets the export business. The International Meeting being planned for November will put products of the region as a whole forward and will see Reunion as the island working with the Region. Reunion Island wants to ensure that the Indian Ocean countries are working more together. The challenge that remains is still a largely inadequate air and sea connectivity schedule that could enhance trade and tourism between the islands and the region as a whole.

Air Austral, Air Madagascar and EWA of Mayotte are all now part of the same group and have confirmed that they are willing to relook at Inter Island connectivity. This comes at a right time as Africa is also relooking at Brand Africa and rewriting its own narrative. Air Connectivity is an important part of this narrative. Reunion is France and the European Union in the Indian Ocean and can become the bridge between Africa and Asia with Europe.