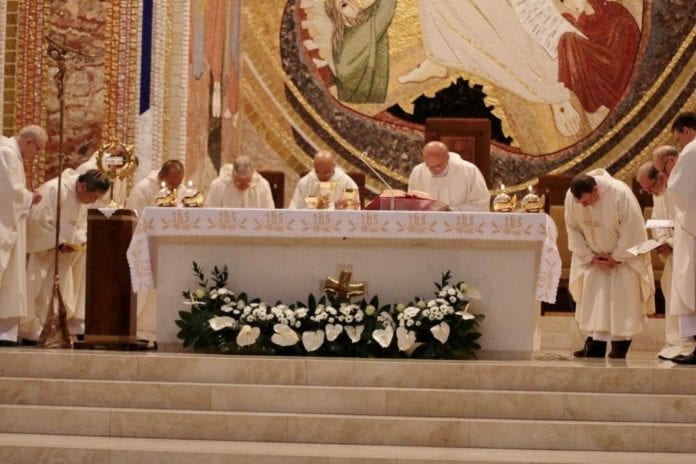 The first edition of the International Congress of Religious and Pilgrimage Tourism, which took place on November 8-12, 2017 under the title “In the Footsteps of Saint Pope John Paul II,” aroused great interest in the tourist environment worldwide. This unique event in Central and Eastern Europe, which gathered specialists in the field of religious and pilgrimage tourism, came to around 200 tour operators from almost 30 countries.

The largest group represented Spain, followed by Italy, but also representatives from such countries as Japan, Malaysia, Paraguay, Argentina, Mexico, USA, Canada, Israel and many other countries (mainly European). The guests of honor were the cities of Fatima and San Giovanni Rotondo. During the congress, guests repeatedly commented on the enormous joy and gratitude of the opportunity to participate in the congress, emphasized the professionalism of the organization and discussed the possibilities offered by the trade offer of Krakow and Lesser Poland.

“We saw with our own eyes how this new event has fit the calendar of events in Krakow: religious tourism professionals is what was needed” – says the organizer of the Congress Ernest Miroslaw, the owner of Ernesto Travel – the leading incoming tourism tour operator from Krakow. “We are convinced that the 2nd edition of the Congress will be carried out with even greater impetus and involvement of regional and national entities, and several hundred people from all over the world will come to the congress to learn how to offer their clients trips and pilgrimages to Krakow, Małopolska and Poland. Last year, despite the fact that I organized the congress for the first time, 200 tour operators came to Krakow. This year, however, I would like to see a larger amount of guests from outside Europe: this is why we started promoting the event in January 2018. ”

So far, more than 100 people have confirmed their participation from such countries as: Italy, Spain, USA, Canada, Lebanon, Israel, Sweden, Lithuania, Vietnam, England, Malaysia, Portugal, Greece, India, Argentina, Andorra, Mexico and Brazil. The guests of honor will be Fatima and Lourdes.

Here is a short summary of the program of the 2nd International Congress of Religious and Pilgrimage Tourism, which this year is entitled: “In the footsteps of Saint Faustyna Kowalska: God’s Mercy will save the world.”

On November 8, the Congress will be opened by the secular and church authorities of Krakow: the inaugural mass, opening speeches, lectures and workshop (expo) with representatives of sanctuaries, places of worship and tourist places will be held. On November 9-11, guests from around the world will have a chance to visiting Krakow and Lesser Poland (Old Town in Krakow, John Paul II Center in Krakow, Sanctuary of the Divine Mercy in Łagiewniki, Wieliczka Salt Mine, former German Nazi concentration camp Auschwitz-Birkenau, parish and the family home of the Holy Father in Wadowice, the Basilica in Kalwaria and the sanctuary of the Black Madonna in Częstochowa).

The importance of this event may also be demonstrated by the partnership of the City of Krakow and the Małopolska region, the Wieliczka Salt Mine, the John Paul II Family House Museum in Wadowice, the center of John Paul II in the White Seas.

The honorary patrons of the Congress are His Eminence Stanisław Kardynał Dziwisz, the Marshall of the Małopolska Voivodship Jacek Krupa and the President of the Polish Tourist Organization Robert Andrzejczyk. During the opening of the congress and presentation, in addition to the partners and patrons mentioned above, the following speakers will also speak: prof. UEK dr hab. Agata Niemczyk (Cracow University of Economics), Dr. Andrzej Kacorzyk (director of the Auschwitz-Birkenau Museum) and Dr. Franciszek Mróż (Camino de Santiago in Poland).

The aim of the Congress is to exchange trade contacts among participants, to promote Krakow, Lesser Poland and Poland as an important destination of religious and pilgrimage tourism not only in the Europe but also worldwide.

Representatives of foreign travel agencies and tour operators, bloggers and journalists, bishops and priests and other organizers of religious and pilgrimage tourism are invited to the Congress, such as diocesan coordinators, heads of foundations and congregations interested in organizing foreigners arrivals to Poland (buyers).

Other entities, both Polish and foreign, such as self-governments, organizations promoting cities or regions, places of worship – pilgrimage sites, tourist places, museums, etc. may participate in the congress as a seller (sellers).