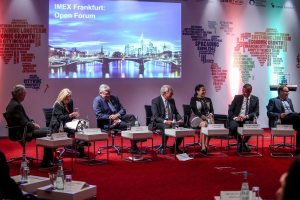 Linda HohnholzMay 16, 2018 5:35 pm 0
The panel of industry leaders who led the discussions during the Open Forum at the IMEX Policy Forum

Globalisation, localisation, city resilience, sustainability and legacy were some of the biggest challenges facing the industry that were discussed at the IMEX Policy Forum, where ministers and political representatives from South Africa, the Netherlands, Argentina, Sweden and South Korea were among 30 national and regional politicians and government officials who engaged with 80 meetings industry leaders.

‘The Legacy of Positive Policy Making’ was the theme of the event, formerly known as the IMEX Politicians Forum, when it took place at the InterContinental Hotel Frankfurt on Tuesday 15 May, the first day of IMEX in Frankfurt 2018. The theme is closely allied to the IMEX 2018 Talking Point of Legacy, with Political Legacy one of the five ‘lenses’ through which the Talking Point is being explored.

The Agenda had been specifically designed to explore how to bridge the ‘partnership gap’ that exists between governments, national and local, and the meetings industry.

After a visit to the IMEX exhibition in the morning, the afternoon began with a private national government discussion in collaboration with the United Nations World Tourism Organisation (UNWTO) chaired by Nina Freysen-Pretorius, President of the International Congress & Convention Association (ICCA).

Exploring ’the evolution of cities in the meetings industry,’ Greg highlighted how every city went through a number of different cycles in the development of meetings business. These cycles were well illustrated by six engaging case studies from Sydney, Singapore, Dubai, Tel Aviv, Cape Town and Barcelona which showed how these cycles were initiated by various factors such as airline and airport development, supportive mayors, building convention centres and hosting major international events.

At the Open Forum, moderated by Michael Hirst OBE, Gloria Guevara Manzo, President & CEO of the World Travel & Tourism Council (WTTC) delivered the opening keynote address. She expressed clear views when examining the challenges facing all areas of the travel and tourism sector in fulfilling outstanding growth potential. Based on research among WTTC members, she said the top three challenges were security, crisis preparedness and management and sustainability and she highlighted the importance of wide ranging collaboration and partnerships between travel industry organisations. In particular, collaboration is important in engaging with governments on issues such as visa facilitation and reciprocity, and in progressing biometrics as a facilitator for security and efficiency.

Discussing sustainability, Gloria said “We must no longer think about PPP (Public Private Partnerships) but about PPC – Public, Private and Community,” because the industry needed to have the support of communities, and she highlighted the future of work as an important new consideration alongside destination and social responsibility, global climate action and tourism for tomorrow.

This keynote prefaced the Open Forum where the views of a panel of industry leaders along with Professor Greg Clark prompted debate on the key issues with the political and industry representatives contributing their valuable views.

Taking part in the day of activities and discussions provided revealing insights for the delegates. Elizabeth Thabethe, Deputy Minister of Tourism for South Africa, a first-time visitor said that the discussion in the Policy Forum had been good and helpful in learning what more South Africa can do to bring major events to the country. Her thought on Gloria Guevara Manzo’s speech was; “Wow!”

Justice Thomas Mihayo, Chairman of the Tanzania Tourist Board felt that “the discussions on many heavy topics were very good. I wish there had been more time to go further into them.” He thought the IMEX exhibition was “fantastic.”

Ray Bloom, Chairman of the IMEX Group commented; “The discussions were fascinating and showed the increasing engagement and understanding between the political world and the meetings industry. IMEX has been bringing the meetings world and public policy makers together for many years and has helped to develop real appreciation of how together they can drive economic growth. Over the years we have seen genuine progress and I’m confident that today’s IMEX Policy Forum took this collaboration further forward. That is our Political Legacy.”