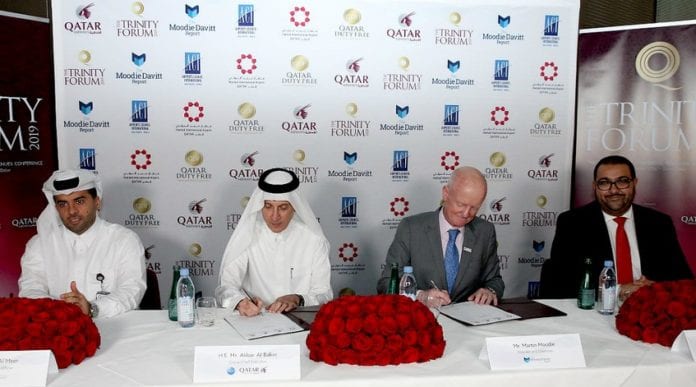 The world’s most influential airport commercial revenues conference, the Trinity Forum, will be held in Doha in 2019, the first time the event has ever been hosted in Qatar. The conference, organized by The Moodie Davitt Report, ACI World and ACI Asia-Pacific, will be hosted by Hamad International Airport (HIA), Qatar Airways and Qatar Duty Free (QDF) and will take place in Doha from 30-31 October 2019.

Qatar Airways Group Chief Executive, His Excellency Mr. Akbar Al Baker, said: “We are delighted to be bringing the Trinity Forum to Qatar for the very first time. This important event will bring the industry’s key leaders, retailers and brands from around the world to Doha, to not only improve and build on the dialogue between airports, concessionaires and brands to benefit passengers, but also to showcase our world-class airline, airport and duty free offering to conference delegates. We look forward to extending Qatar’s warm hospitality and culture to all guests at next year’s event.”

Hamad International Airport Chief Operating Officer, Engr. Badr Mohammed Al Meer, said: “We are proud to collaborate with The Moodie Report, ACI World and ACI Asia Pacific in hosting the Trinity Forum in Qatar for the first time. As we gear up for what is set to be an exciting future for the industry in the region, we look forward to sharing our expertise and working with all those involved to usher in a new era of opportunities that redefine the airport and travel experience.”

Qatar Duty Free Vice President Operations, Mr. Thabet Musleh, said: “Hosting the Trinity Forum in Qatar for the first time reflects our ongoing commitment to retail innovation and excellence. At Qatar Duty Free, we work hard to enhance the passenger experience in everything that we do, and work closely with all our brands and partners to continuously innovate to create lasting and memorable experiences.

“Hosting an event of this caliber in Doha aligns perfectly with our vision at Qatar Duty Free, and we are delighted to be partnering with The Moodie Davitt Report, ACI World and ACI Asia-Pacific to bring the industry’s leaders to Doha for this world-class Forum.”

The Moodie Davitt Report Founder and Chairman, Mr. Martin Moodie, said: “We are delighted to bring the Trinity Forum, the world’s most influential airport commercial revenues conference, to the Middle East region and, in particular, to Qatar, a shining example of the pursuit of airport retail and commercial excellence. Hamad International Airport is one of the world’s great airports, and Qatar Airways is one of modern aviation’s most extraordinary success stories. We are proud to partner with such outstanding organizations and with Qatar Duty Free, which so epitomizes our industry’s drive for retail and consumer service excellence.

“Since its launch in 2003, the Trinity Forum has grown from strength-to-strength with each edition. The most recent event, held in Shanghai, saw record attendance and was testimony to the importance all sectors of the industry place on the need for a Forum which champions collaboration, innovation and excellence, debates key issues and questions industry shortcomings. We have exciting plans to grow the event in 2019, including an extended focus on food and beverage, as well as the changing face of airport retail and other consumer services.

“Our hosts for next year’s Trinity Forum, Hamad International Airport, Qatar Airways and Qatar Duty Free, have constantly pushed the boundaries of retail excellence, innovation and customer service. We look forward to working closely with our hosts and co-organizers, ACI World and ACI Asia-Pacific, on the Trinity Forum 2019, which will once again bring together industry leaders, positive disruptors and thought leaders from across the globe.”

ACI World Director General, Ms. Angela Gittens, said: “The consistent growth of this Forum is testament to the appetite from our members, retailers and suppliers for more collaboration and innovation in the commercial space. We are grateful to The Moodie Davitt Report team and world business partners for all their collaboration and support over the years we have worked together on this event.”

ACI Asia-Pacific Regional Director, Ms. Patti Chau, said: “Qatar’s unique blend of ancient culture and progressive modernity will make Doha the perfect place for the annual meeting. The Trinity Forum brings together the crucial triumvirate of airports, concessionaires and brands. Our host, Hamad International Airport, together with Qatar Duty Free and Qatar Airways are stalwart innovators in our industry, and we look forward to working with them to bring the Trinity Forum to Doha next October.”

The second-largest duty free operator in the Middle East, QDF boasts more than 90 elegant boutiques and luxury, high-end stores, as well as more than 30 restaurants and cafés covering an area of 40,000 square meters at HIA, providing travelers with a world-class shopping experience under one roof. Luxury brands also available at the five-star airport include Tiffany & Co., Gucci, Bulgari, Hermès, Burberry, Moncler, Rolex and Harrods. In addition, the award-winning duty-free retailer regularly showcases podiums and pop-up stores, including the most recent DIOR LES PARFUMS podium, a TUMI pop-up store, the L’Oréal Grand Hotel Podium and the Prada Voyage Podium.

Qatar Duty Free was awarded ‘Airport Retailer of the Year’ at the 2018 DFNI Global Awards. In April, the leading airport retailer was recognized at the PAX International Readership Awards, when Qatar Airways won ‘Best In-Flight Duty-Free Program’ for the Middle East and Africa and was acknowledged as an industry leader for its outstanding in-flight duty-free service, which is operated by Qatar Duty Free.