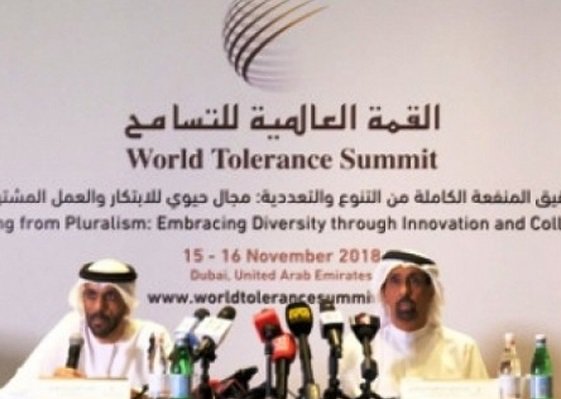 The first edition of World Tolerance Summit in the United Arab Emirates held on its second day a simultaneous series of workshops honoring the values of the nation’s founding father, His Highness the late Sheikh Zayed bin Sultan Al Nahyan. WTS 2018 was held on November 15-16, 2018 at Armani Hotel in Dubai and in conjunction with UNESCO’s International Day for Tolerance.

Close to a thousand number of participants from different countries joined UAE’s first-ever WTS 2018. Day one kicked off with the formal opening of the summit by the UAE Minister of Tolerance and Chairman of the Board of Trustees of the International Institute for Tolerance, H.E. Sheikh Nahayan Mabarak Al Nahyan. H.H. Sheikh Mohammed bin Rashid Al Maktoum, UAE Vice President and Prime Minister, and Ruler of Dubai, attended the opening ceremony where UAE’s perspective on a tolerant world was shown in a series of videos. Included in said videos was the very foundation of UAE, which stands for unity and compassion led and inculcated by the nation’s founding father.

In his speech, the minister said, “Sheikh Zayed was a role model for justice, compassion, knowing the other, and courage in carrying out his responsibilities. We are blessed that our country’s commitments to these values and principles have continued under the leadership of His Highness the President, Sheikh Khalifa bin Zayed Al Nahayan, who is strongly supported by His Highness Sheikh Mohammed bin Rashid Al Maktoum, Vice President, Prime Minister and Ruler of Dubai and by His Highness Sheikh Mohammed bin Zayed Al Nahayan, Crown Prince of Abu Dhabi and Deputy Commander of the Armed Forces, as well as by all other leaders of the United Arab Emirates.”

Three topics per workshop were conducted at the second day of WTS 2018. Tolerance Majlis-Room A started with the topic Tolerance Through the Aesthetic Arts conducted by Dr. Noura S. Al Mazrouei, Assistant Professor at the Emirates Diplomatic Academy (UAE). The workshop discussed the four dimensions of music that could be used to convey a message of peace and tolerance among nations.

A workshop on The Youth of Today, The Leaders of Tomorrow followed which was held by Pr. Dr. Malek Yamani, General Manager of YAMCONI. Dr. Yamani expounded on how investing in people, especially on the youth, and believing in their abilities can build a vibrant society.

Abdulla Mahmood Al Zarooni, Head of Personal Status Settlement Section, Dubai Courts, led the workshop on A Tolerant Country, A Happy Society. Said workshop touched the essence of true tolerance as the key to genuine happiness and as a strong foundation of civilization.

Tolerance Majlis-Room B started with Zayed Values led by Dr. Omar Habtoor Aldarei, Executive Director of Islamic Affairs, General Authority for Islamic Affairs and Endowments (UAE) and Ahmed Ibrahim Ahmed Mohamed, Member of the Emirates Association for Human Rights (UAE). Together they shared the values of tolerance inculcated by UAE founding father, the late H.H. Sheikh Zayed bin Sultan Al Nahyan. The late ruler’s vision for a nation built on unity was shared to better understand the basics of tolerance in the eyes of his descendants and the people of UAE.

This was followed by a workshop on Women Empowerment & Gender Equality. H.E. Thoraya Ahmed Obaid, Member of the Board of Directors, Center for Strategic Development, Ministry of Economy and Planning, (KSA) and H.E. Ms. Hoda Al-Helaissi, Member of Saudi Arabia’s Shura Council and former Vice Chairperson of King Saud University (KSA). The two women leaders discussed the promotion of the role of women in various economic and social fields. The workshop also expounded on equal rights to be enjoyed by women in accordance with customs and traditions.

Promoting Tolerance in Education workshop was conducted by Dr. Shebi Badran, Dean of The Faculty Education, Alexandria University (Egypt) and Dr. Khaled Salah Hanafi Mahmoud, Assistant Professor of Pedagogy, Alexandria University (Egypt). Both academicians shared their thoughts on promoting the values of citizenship and tolerance in education and the role of Arab universities in promoting a culture of tolerance among their students.

Day one held the summit on how to promote and spread the culture of tolerance, dialogue, peaceful coexistence, and prosperity in diversity in several facets of society. The Tolerance Leaders Debate discussed the role of global leaders in the promotion of tolerance to achieve a happy and tolerant society.

The Role of the Governments in Encouraging Tolerance through Peaceful Coexistence & Diversity shared the governments’ role in initiating education programs and curricula in line with the values of tolerance. The panel was in agreement that education cures intolerance and that it is imperative for new leaders to safeguard the future of a tolerant world.

The topic Collaborative Efforts from International & Local Associations to Promote Harmony and to Address the Issues of Intolerance, Fanaticism, and Discrimination highlighted the need to have an International Convention on Tolerance and the creation of tolerance strategy to sustain the current efforts. The importance of equality was also discussed with emphasis on equal opportunity regardless of race, social standard, and religious belief.

The general consensus on the power of the media to promote tolerance was heard during the panel discussion on Media Session: Enhancing Positive Messaging on Tolerance and Diversity. The panel was of the same opinion that media can be used to spread hate speech, but it can also be used positively to ease social tension and instead promote equality, tolerance, and respect.

Discussion on Creating an Organizational Culture Promoting Tolerance, Fostering Peace and Achieving Organizational Goals extracted the importance of cultural orientation and the use of technology to bring people together despite the differences in color, culture, and religion. The importance for companies to have a set of values was also discussed and the level of readiness to accept and respect people with determination and special needs at the workplace.

The last panel discussion was on The Responsibility of Educational Institutions in Ingraining Qualities of Tolerance in Today’s Youth. One major point raised was the educational institution’s responsibility to respond to the ethical challenges of the youth. The role of women was also discussed, specifically their maternal influence to teach their children on the importance of practicing tolerance in diversity and respect for others.

WTS 2018 concluded with a Summit Declaration ensuring global cooperation in the promotion of tolerance and peaceful coexistence in all tiers of society. The summit was an initiative of the International Institute for Tolerance, a part of Mohammed bin Rashid Al Maktoum Global Initiatives.