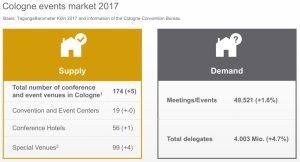 In 2017, the event market in Cologne, Germany exceeded four million participants for the first time. That’s the conclusion of the current TagungsBarometer (Conference Barometer), a survey of convention centres, conference hotels and event locations that is conducted regularly by the Cologne Convention Bureau (CCB) in cooperation with the Europäisches Institut für TagungWirtschaft (EITW).

Positive developments since the first survey

Organizers of corporate events top the list of conventions and congresses
Conventions and congresses account for 71 per cent of the events held in Cologne in 2017; other types of events account for the remaining 29 per cent. Organizers of corporate events continue to top the list of conventions and congresses, and in the past year they further increased their share of the total, from 76 per cent to 81 per cent. Banks and insurance companies are still the most important sector in this category, followed by medicine and pharmaceuticals. The EDP sector occupies third place, having surpassed the communications sector for the first time.

The USA is gaining ground among the international source markets. Together with the UK, it now occupies first place among event organizers from abroad. The Netherlands, Switzerland and Austria follow after a considerable gap. Most of the events have their organizers in Germany. A shift has been evident during the last few years: more and more organizers from outside the Cologne region have purposely selected Cologne as an event venue (2016: 36.6 per cent; 2017: 44.17 per cent), thus creating important economic advantages for the city.

On April 9, 2018, the CCB, which is celebrating its tenth anniversary this year, will publish a comprehensive survey of the economic effects of Cologne’s convention and congress market. No overview of this kind has ever been published in Germany before.