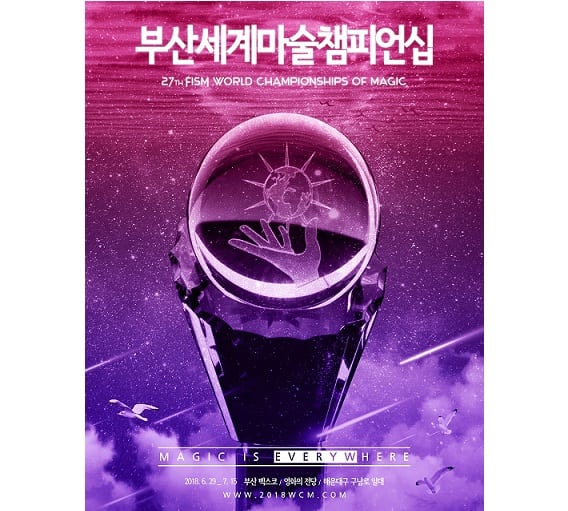 International experts in illusion will be competing in Busan this month for the coveted Grand Prix in magical mastery at this year’s World Championships of Magic (FISM Korea 2018), scheduled for July 9-14 at BEXCO. The week-long event will also give its overseas participants the opportunity to discover the attractions of Korea’s largest port city, a regular host of major international gatherings.

Held every three years, the championships are the cornerstone event of the International Federation of Magic Societies (FISM), the largest magic society in the world, with a membership of more than 70,000 from 49 countries. The Busan event will see more than 150 magicians selected from continental preliminaries from across the globe compete for the society’s highest accolade. Attending overseas competitors include veteran duo Vik & Fabarini, Hector Mancha, and Kenji Minemura, among others. Top Korean magicians also attending include Charming Choi, Han Seol Hee, and Lee Eun Gyeol.

City and national level support has been provided for FISM Korea 2018, including promotional and operational assistance by the Busan Tourism Organization’s convention bureau division. These, along with various other forms of financial, promotional, marketing, and other support, are available to a wide range of business events hosted in Busan, further details about which can be found at www.bto.or.kr.

The Busan Exhibition & Convention Center (BEXCO), a member of the Busan MICE Alliance is the city’s largest business events facility. Located in the city’s modern Haeundae district, it will place FISM participants within easy reach of Korea’s most famous beach, along with top international hotels, casinos, shopping, and entertainment options.

Busan’s global convention profile has grown steadily in recent years, with the city currently ranked 7th worldwide for the number of congresses held over the previous year in the latest Union of International Associations Meetings Statistics Report.

Busan, formerly known as Pusan and now officially Busan Metropolitan City, is South Korea’s second most-populous city after Seoul, with a population of over 3.5 million inhabitants. It is the economic, cultural and educational center of southeastern Korea, with its port—Korea’s busiest and the 9th-busiest in the world —o nly about 120 miles (190 km) from the Japanese islands of Kyushu and Honshu. The surrounding “Southeast Economic Zone” (including Ulsan and South Gyeongsang) is now South Korea’s largest industrial area.