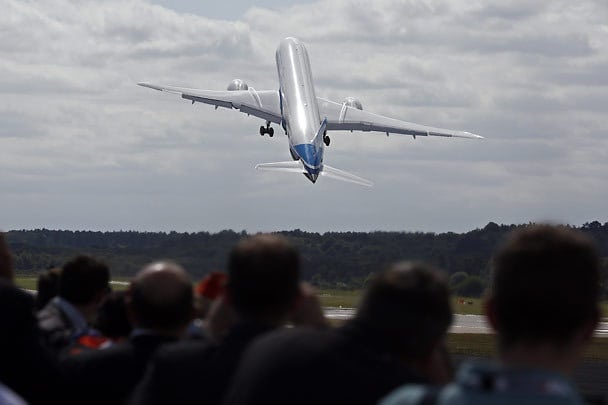 Boeing announces $100 billion in orders and commitments at Farnborough Airshow

Linda HohnholzJuly 20, 2018 1:36 am
Boeing announces $100 billion in orders and commitments at Farnborough Airshow

Boeing strengthened its position as the global leader of the aerospace industry, booking historic orders and showcasing its innovation and strategy for growth at the Farnborough International Airshow. At the close of the industry portion of the show, Boeing announced a total of $98.4 billion in orders and commitments for commercial airplanes at list prices and $2.1 billion in commercial and defense services orders and agreements.

“Boeing led the way at Farnborough, demonstrating value for our customers, capturing important new business in products and services, and announcing the unique strength of our strategic partnership with Embraer. We also invested in our European communities, and launched our new Boeing NeXt organization—proving the future is built here, at Boeing,” said Chairman, President and CEO Dennis Muilenburg. “We will continue to win in the marketplace thanks to our talented team, who innovate across our enterprise with One Boeing collaboration and deliver on our proven portfolio with relentless customer focus.”

Boeing marked an outstanding week for order capture in commercial aviation, with customers announcing 673 orders and commitments in total, reflecting a continued resurgence in demand for freighters and strong order activity for the 737 MAX and 787 passenger airplanes. Boeing secured 48 orders and commitments for the 777F, five for the 747-8F, reflecting continued strengthening in the cargo market globally.

Customers also continued to demonstrate a strong preference for Boeing’s passenger airplane portfolio, with 52 orders for the 787 and 564 for single-aisle 737 MAX, including a major commitment from VietJet for 100 airplanes and strong demand for the largest variant of the MAX family, with 110 orders and commitments for the 737 MAX 10.

On the services side of the business, Boeing secured commercial and government customers including Antonov, Atlas Air, Blackshape, Cargolux, Emirates, EVA Airways, GECAS, Hawaiian Airlines, International Water Services, Malindo Air, Okay Airlines, Primera Air, Royal Netherlands Air Force, United States Air Force, WestJet and Xiamen Airlines.
At the show, Boeing also revealed its 2018 Commercial Market Outlook, raising its 20-year outlook for commercial airplanes and services to $15.1 trillion. The global market is forecast at almost 43,000 new airplanes, valued at $6.3 trillion, and demand for $8.8 trillion worth of commercial services through 2038. The strength of the cargo market, noted in the CMO, was underscored by more than 50 freighter orders and commitments at the show.

The Boeing 737 MAX 7 and the Biman Bangladesh 787-8 starred in the daily flying display while the Air Italy 737 MAX 8, a Qatar Airways 777-300ER, and CargoLogicAir and Qatar Airways 747-8 Freighters were featured in the static display. The U.S. Department of Defense displayed the AH-64 Apache attack helicopter, the CH-47 Chinook heavy-lift helicopter and the F-15E Strike Eagle.

During the show, the company also announced its collaboration with artificial intelligence company SparkCognition to deliver unmanned aircraft system traffic management (UTM) solutions. This announcement coincided with the launch of Boeing NeXt, an incubator organization for future commercial mobility solutions that will shape the emerging world of travel and transport. Boeing NeXt will leverage the company’s research and development activities and investments in areas such as autonomous flight, smart cities and advanced propulsion, and address transportation challenges of the future by moving people and goods with proven technology.

Finally, the show marked the launch of a new brand campaign, “The Future is Built Here,” highlighted by a dynamic exhibit that featured interactive virtual and augmented-reality displays that showed visitors Boeing’s commercial and defense products, service offerings and future innovations.