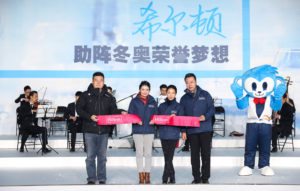 Not America first for Hilton the official hotel partner of the Chinese Olympic Committee. Hilton today kicks off the “Win More For Big Dreams” campaign in Beijing, showcasing its support for the Chinese Sports Delegation as they compete in the PyeongChang 2018 Winter Olympic Games. The hotel group encourages Team China fans to join together, share in China’s Olympic dreams for honors and cheer on its athletes.

Hilton has served as a dedicated partner of the Chinese Olympic Committee since 2011. This year, the hotel group will team up once again with the Committee to provide hospitality support for the Chinese Sports Delegation and the China House in PyeongChang in a number of ways. Gourmet Chinese cuisine and greetings will be available for the Olympic community during the Games to showcase the splendour of authentic Chinese culture, especially at the traditional reunion dinner on Chinese New Year’s Eve. prepared by Chef Kong, the Executive Chef of Hilton Beijing Wangfujing. Hilton also backs the athletes and their families with other tangible benefits, such as with Hilton Honors membership and points.

“Hilton is honored to continue its proud support of the Chinese Olympic Committee in 2018, highlighting its commitment to support the people of China, the Olympic Movement, and the athletes who aspire to achieve the China dream,” said Wendy Huang, Senior Vice President and Commercial Director, Greater China and Mongolia, Hilton. “While Hilton is sparing no efforts to support Team China and the China House in PyeongChang, providing exceptional experiences to every guest and Hilton Honors members, we are also calling on the fans in China to share their support for the Chinese Sports Delegation and ‘Win More for Big Dreams’.”

Shen Xue and Zhao Hongbo, the first Chinese pair to win a gold medal at an Olympics for figure skating, attended the launch event together with their students Peng Cheng and Jin Yang. The latter pair won gold at the ISU Challenger Series Finlandia Trophy earlier this year. “Looking back at my time as a professional skater, I wished I could have won every single medal for my beloved country. Although there my career has a new direction, my dream remains the same.” Zhao Hongbo, the current head coach of the Chinese figure skating team said, “There is one thing that has remained unchanged for me through all these years. That is the support of Hilton. What a privilege it is for me to join you here today, where I have the opportunity to share my dream and cheer for the Chinese Sports Delegation. I sincerely hope that we may all achieve our dreams.”

As the first and only multinational hotel group to sponsor the Chinese Olympic Committee, Hilton has worked together with the Committee all the way through the 2012 London Olympics, 2014 Sochi Olympics, and 2016 Rio Olympics, providing meticulous care for Team China in every China House. With the launch of the “Win More For Big Dreams” campaign, the hotel group has built up a platform for Chinese guests and Hilton Honors members to cheer for Team China and share the joy brought by the Olympic Games.

“The development of sports is essential to achieving the China Dream. The long-term partnership between Hilton and the Chinese Olympic Committee helps promote the Olympic Movement,” said Wang Mingyan, Deputy Director, Marketing Department, Chinese Olympic committee, as well as Deputy Director, Equipment Ceter, General Administration of Sport of China, at the launch event. “We are very grateful for the continuous support from Hilton of the Chinese Olympic Dream. And we believe that with the world-class services provided by Hilton, the Chinese Sports Delegation will be at their peak performance during the PyeongChang 2018 Winter Olympic Games.”

As a leading global hospitality company, Hilton has operated in China for nearly three decades, delivering exceptional experiences to win the hearts of Chinese customers. The hotel company has come to identify with the dreams and aspirations of the people here, among which the strongest is the Chinese Olympic Dream. With the XXIII Olympic Winter Games approaching, Hilton provides a platform for guests to engage in the Olympic Spirit and share well-wishes with China’s athletes. Through the “Win More for Big Dreams” campaign, Hilton aims to bring together fan support and provide new opportunities to all who are still fighting for their dreams. Hilton looks forward to further providing Chinese guests with exceptional hospitality services and celebrating more milestones with its Chinese customers.